We want to follow up on our announcement regarding Submarines in Random Battles and share more details.

The Test of Submarines in Random Battles is an important change affecting the gameplay experience. During the first two weeks of the release of Update 0.10.9, all players will be able to demount Upgrades and reset Commander skills for free. For those who want to reset all of their Commanders' skills at once, a special button will be available in our weekly Mission Briefing article which will be released on the portal on Thursday, 7 of October for this purpose. This will allow you to test submarines and their counterplay with different setups for both commanders and upgrades for free, as this is an important change for surface ships since we added depth charges to almost all ships

The interaction between the submarine pings and surface ships, in particular battleships, was a popular topic brought up by you.

In 0.10.9, we made significant changes to submarines and their interaction with surface ships, one of which was the addition of Anti Submarine Warfare armament to almost all ships, so we need to first evaluate this change's impact on Submarines and other classes. After that, we will return to the issue of assessing the interaction between Battleships and Submarines specifically and determine what further steps we need to take. If the following tests show that the current implementation does not work well enough, we will think about improving or changing it. We don't want to make any hasty decisions at the moment since Submarines have not yet been tested with all the latest changes. We would like to remind you that although Submarines have gone through many stages of testing and are already in their final stages, they are still firmly in the testing phase and we are continuing to work on them and change them as needed.

Besides this, we also wanted to share some details about the sonar ping + homing torpedo mechanic: when a torpedo comes within a certain distance of its pinged target, it will stop homing and continue in a straight line.

In our previous post about submarines, we mentioned our expectations on the popularity of Submarines (measured by the number of times this ship type is taken into battle) in Random Battles. Unfortunately, the phrasing was not completely clear and caused some confusion.

We will not make Submarines overpowered to boost their popularity. Our goal is to create balanced ships with other classes always in mind. To accomplish a certain level of popularity, we improve or change mechanics. The stats of a ship will of course affect its popularity, but its mechanics will affect it a lot more. Not all concepts are created to be popular with every player — some are designed to provide variety and fill less widely demanded but still interesting and desired gameplay niches.

Right now, submarines are performing relatively weak in terms of statistics (things like damage, winrate, or their impact on battle outcome), so we are working both on balance and improving their mechanics. When we will reach a healthy level of efficiency, we will work on fine-tuning their settings.

If the class' popularity is lower, it will indicate that players interested in submarines do not like their mechanics, and we will look into how we can improve them. If, on the contrary, their popularity is significantly higher than we expect, we will first look at how it influences the game as a whole. If it impacts the game poorly, then we will work with subs mechanics and try to further normalize their interaction with other classes. We will not attempt to decrease their popularity with nerfs if the class is already well balanced.

But we do not expect submarines to be overly popular due to the specifics of their mechanics and gameplay. As preliminary data from the current Ranked season shows, our initial assessments were quite close to the real ones.

Continuing the question from the previous section, we would like to share some data about the popularity of Submarines in Ranked Battles: as you can see, from the start of the Ranked Season, there was a peak in the popularity of the class, but after that, the number of battles leveled off and has stayed within 4-8% at tier X.

In addition, judging by the stability of submarines' popularity, the basic mechanics work well, and a player base is already forming around the class. At the moment, balancing and fine-tuning the current mechanics is one of the most important things we will work on. That is why submarines are being tested in Random Battles.

The spikes you can see in the graph are the effects of Random Bundles: players keep Submarines parked until the weekend and then play them. Their popularity in the Golden League is decreasing, and we connect this to the fact that submarines are a new, somewhat unknown class that is weaker than others. Since the main drive in the Golden League is victory, players choose the classes they feel confident in and that provide them the highest chance of winning. The fact that submarines are now weaker than other classes can be seen on the following graphs with data for the current Ranked Season.

All values ​​and metrics below are averages for the current Ranked Battles season. 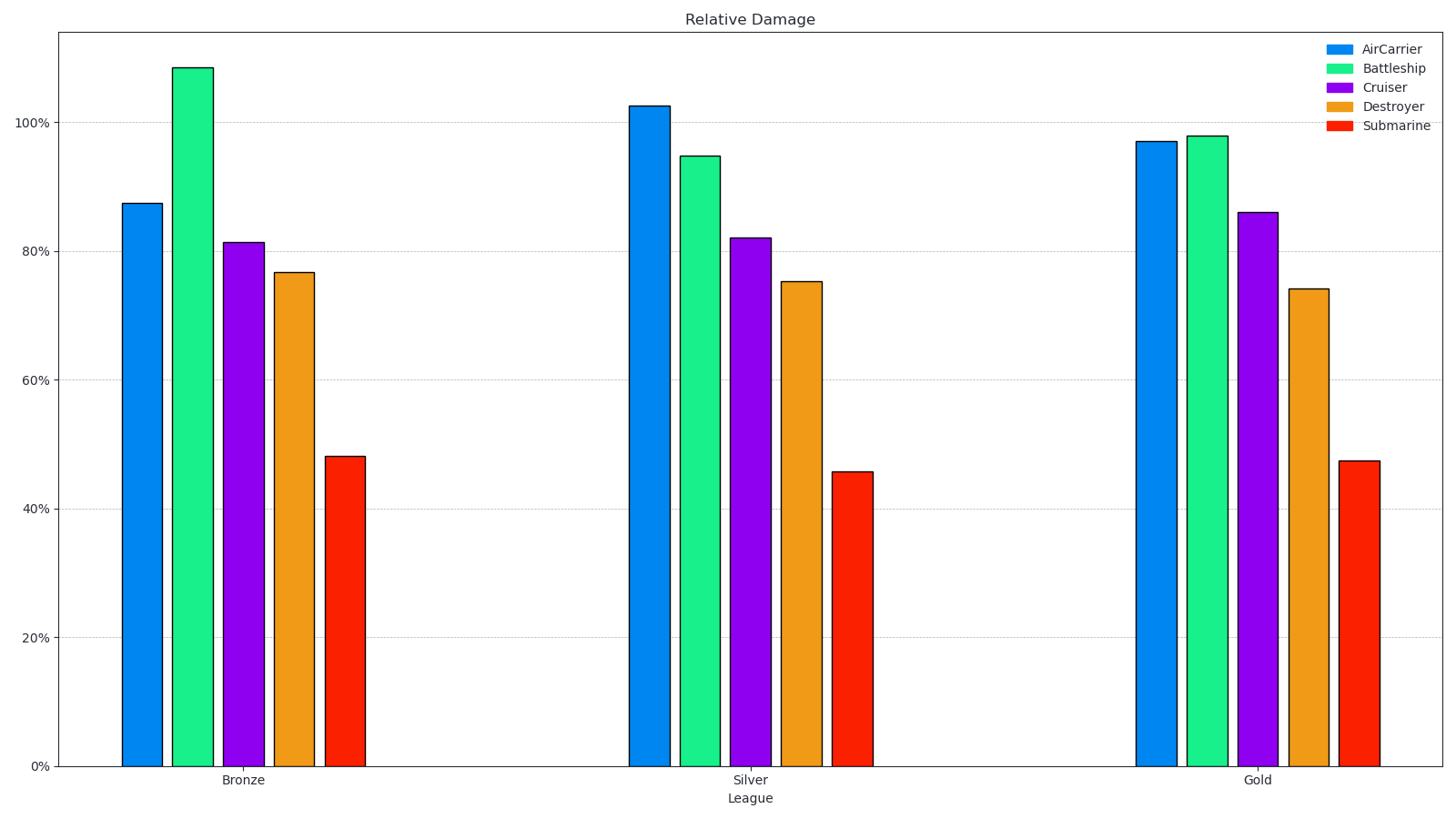 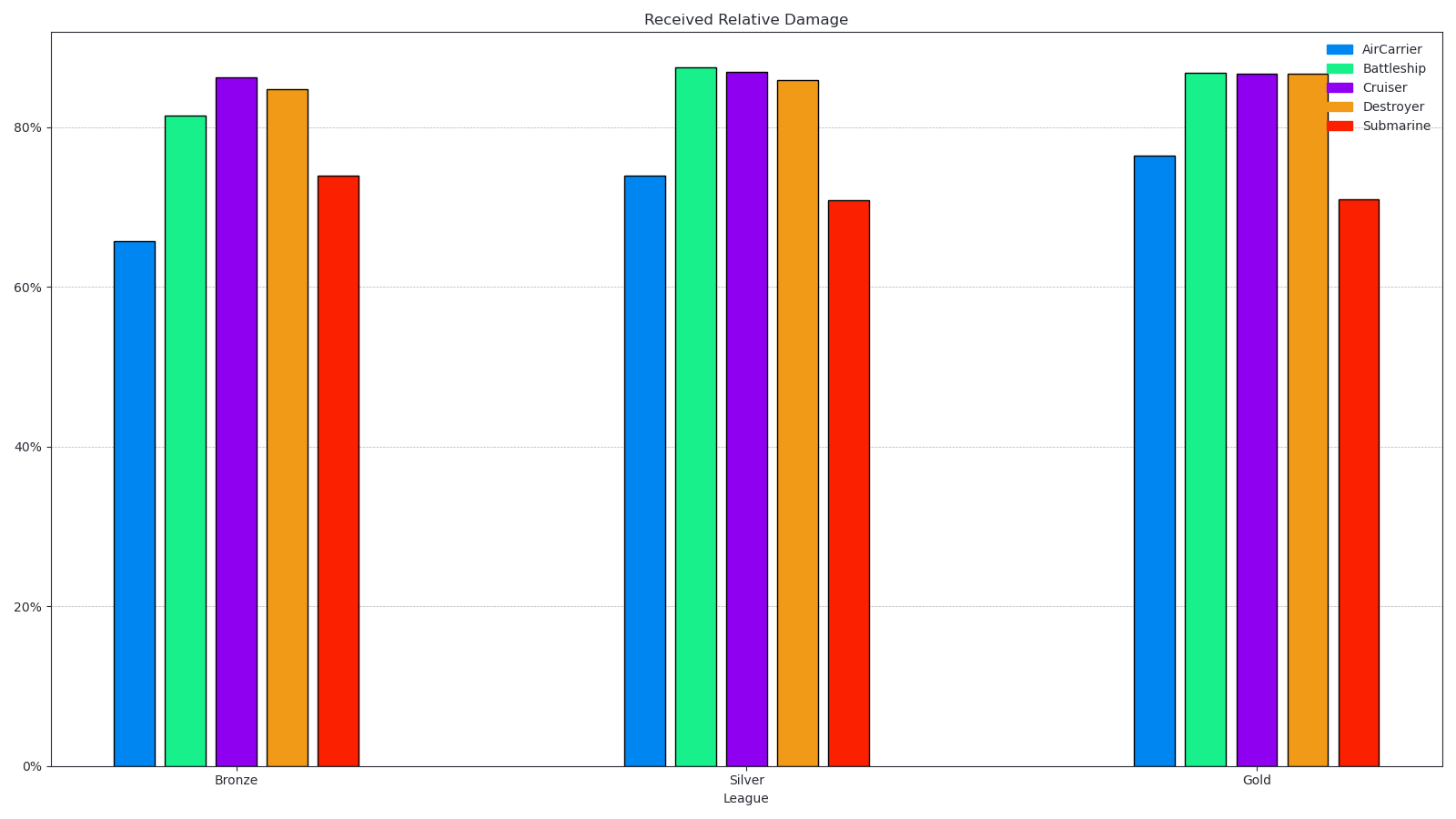 This value is smaller for destroyers and cruisers than for Battleships and Aircraft Carriers since their tasks also include spotting and capturing points. However, smaller values ​​are normal here and do not need to be equal for all classes.

The lifetime of classes in Battle, percentage values: 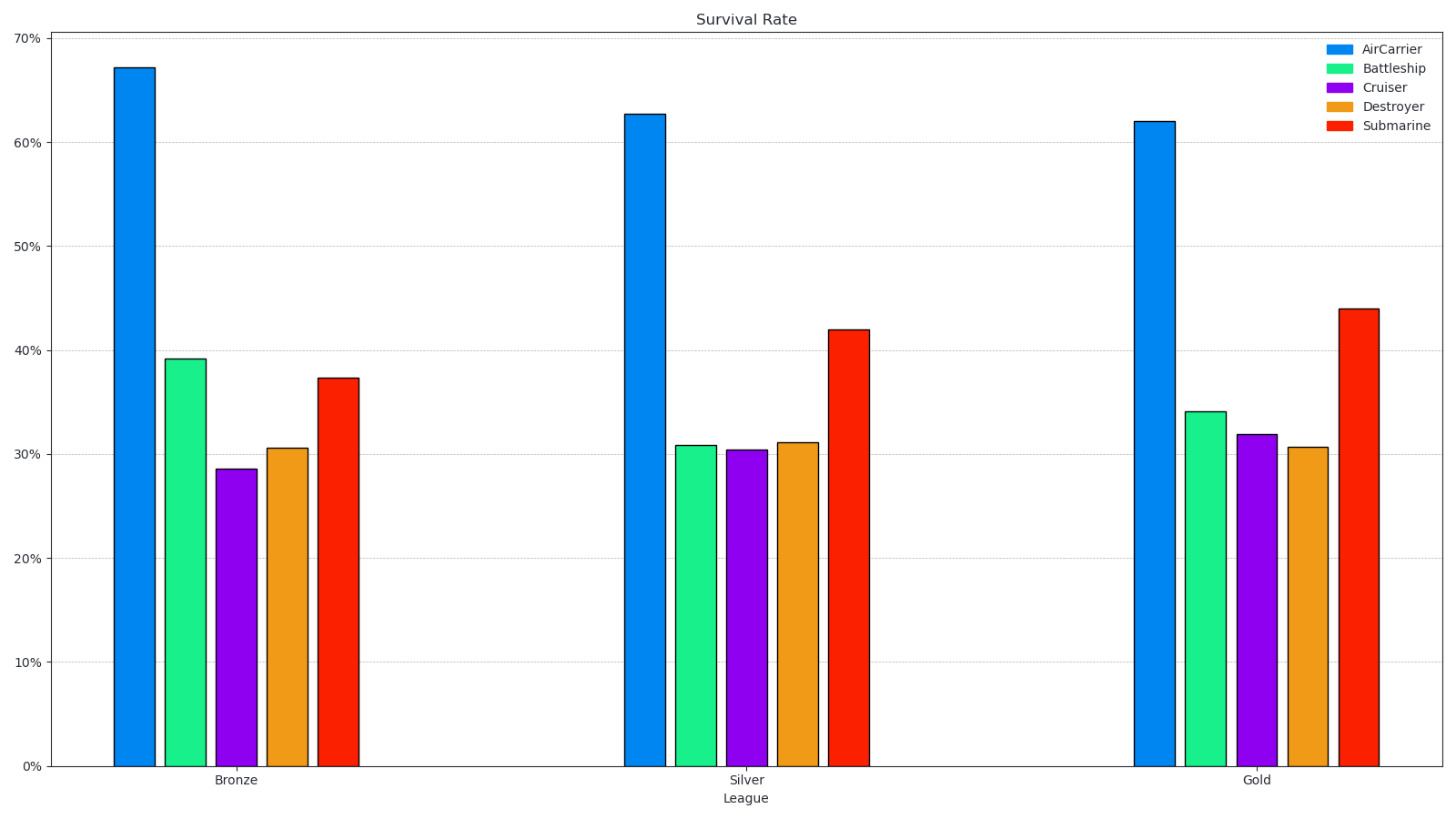 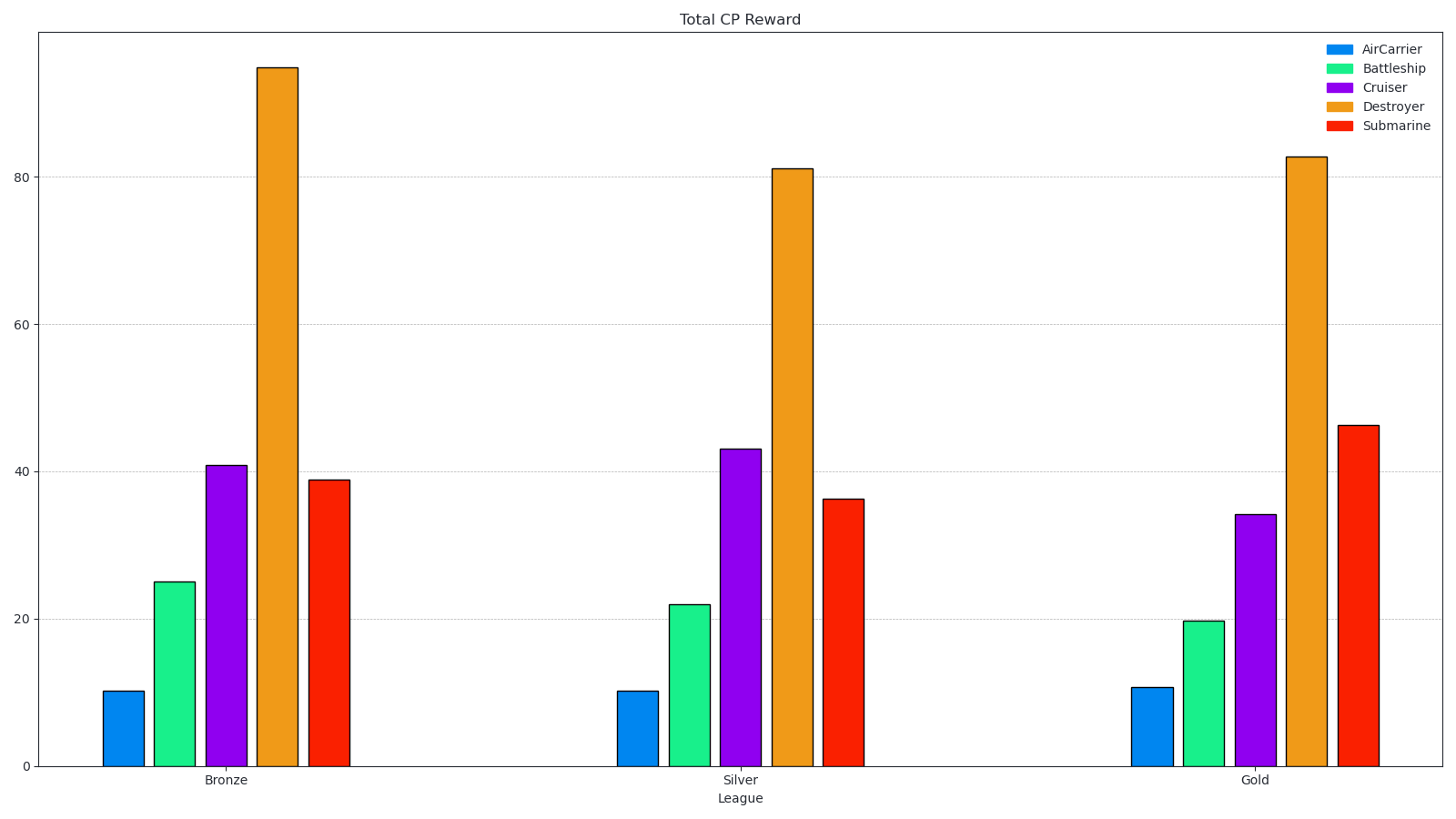 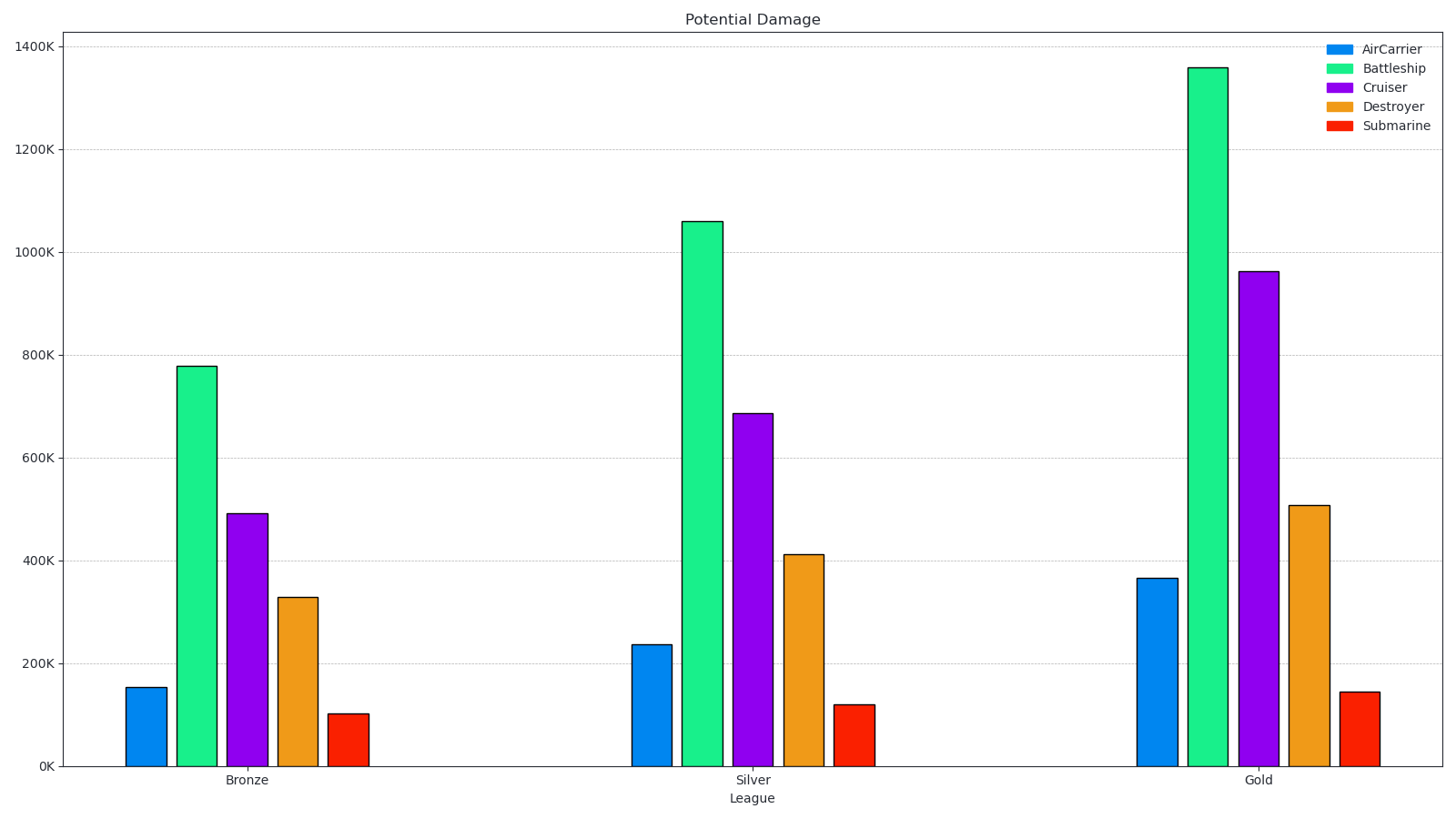 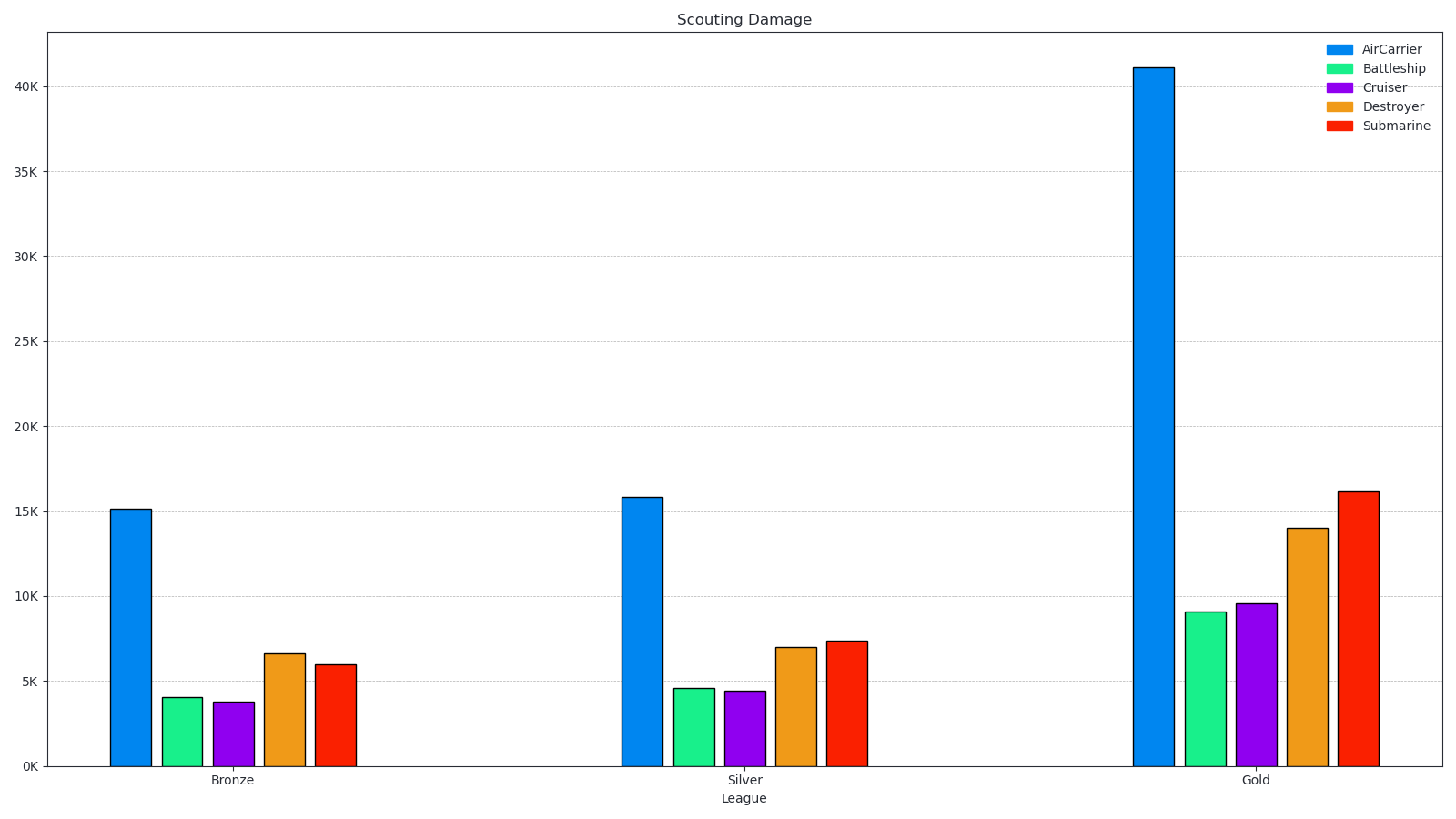 There was a hypothesis that the presence of Submarines noticeably prolongs the time of the Battle, but as we can see from the graphs, they did not have a significant effect on the time of the Ranked Battles: 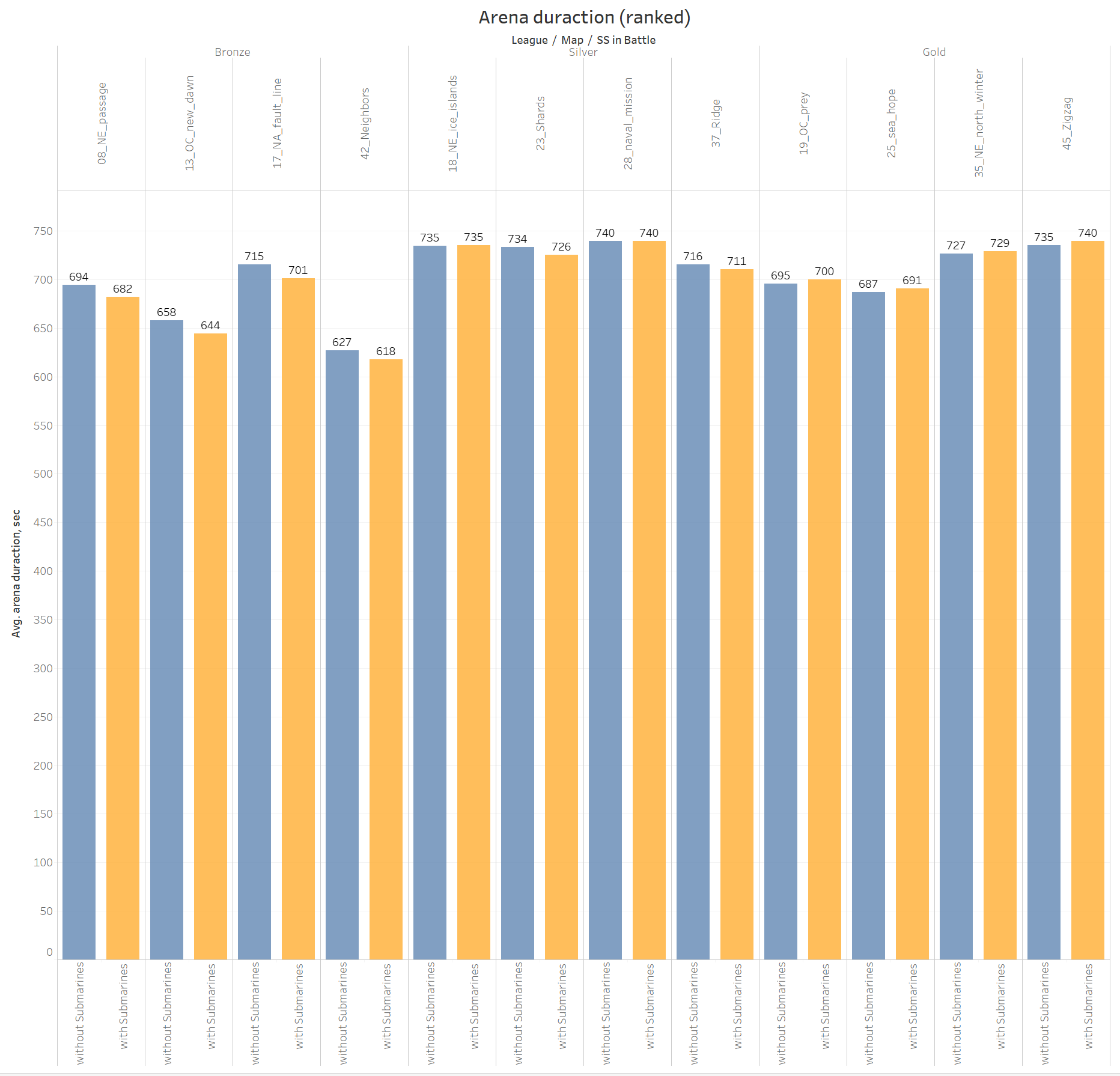 We had a lot of comments on our decision to test submarines in Random Battles. Submarines are a new class with new mechanics, and such test considerably differs from standard ship testing. In previous closed tests, we focused on assessing the performance of the mechanics and checked their general readiness in Ranked Battles. We've made changes including those based on feedback, but at the moment, we need to find the potential shortcomings that previous tests, due to their specificity, could not detect: this involves a fine adjustment of balance, polishing of mechanics, and other final touches. Random battles are best suited for this stage and allow us to bring submarines to their final state as part of the test so that we won't have to urgently apply significant changes immediately after their release, as it was in updates 0.8.0 - 0.8.0.3 after the aircraft carriers rework. This is an important stage that directly affects the balance of Submarines and surface ships, and it requires a lot of battles to occur with Submarines and against them.

While we're happy to see that some wordings make you smile and even become funny memes, that may indicate that we were not clear enough in our previous communications. So, we wanted to clarify what was meant by the phrase "For example, judging by the test results, you enjoyed dropping depth charges". Ship depth charges are designed to directly impact the submarines and provide a controlled counterplay against the new class. We needed to understand how this tool works, whether the players like it, and whether it fulfills its intended function. To understand that, we asked many different questions to the test participants, including "What did you like about playing against a submarine" and "Did you like using depth charges against the submarines". The use of depth charges in the current iteration is one of the factors that respondents liked very much, especially compared to the first iterations of the test, so we decided to note it to share the state of one of the main armaments used to counter submarines.

We also noticed the request to display the Depth Charge drop points: we have added this to the list of improvements and will consider ways to implement it.

Many of you noted that we do not plan to increase the number of players in Battle due to the possible increase in server workload.

An increase in the number of players in battle does affect the server, but a lot less, than, for example, battles with a lower amount of participants, since this implies that more total battles are being played at the same). The most significant load on the servers is exerted not by the number of players but by the number of battles currently taking place on the server. Brawl Season in 1x1 format affects the server a lot more than any other type of Battle. Since Brawls are fairly popular and we did not observe significant problems with the servers when they were conducted, we can say that our servers work efficiently in the overwhelming majority of the time, except in emergency cases. Our servers in four regions have been available 99.96% of the time in 2020, excluding the scheduled time for installing updates.

This is why we consider the impact on the player's experience and that almost the entire balance of Random Battles (maps, ships, and other mechanics) is tailored to the 12x12 format with its timings to be the main factors for the decision.

We've already talked about the limits on the number of Submarines in a team, and we would like to add that joint limits on Submarines and Aircraft carriers also apply.

By the 4th minute of waiting for the first player in the queue, these restrictions are softened:

It should be noted that you can encounter Battles with fewer ships of these classes — we are talking about maximum numbers.

We may make changes due to spikes in individual classes' popularity: waiting time in the queue is one of the key metrics for us, and we do try not to allow too long a waiting time, as any additional limits can negatively affect the queues of the matchmaker.

One of your feedback points was Random Bundles and the fact that players could receive access to Tier X Battles without ever having tried high-level Battles. We took this into account and changed the distribution mechanics to a chain of sequential combat missions:

This is a chain of Combat missions, and after completing the first mission in a chain, you'll get access to the next one, etc. The chain will refresh every two weeks.

Thank you for your time, and we await your feedback on our forums, official Discord, and other platforms!