Previously, we described how visual customizations and economic bonuses would be separated from each other. But the large volume of the post, the complexity of the changes, and a lot of the details inevitably led to many questions. We addressed many of them as accurately as possible at different times and on different sites, but it may be difficult to piece them all together for those who weren't aware. Therefore, in this post, we want to compile the answers to the most popular questions, as well as announce a few small changes in the previously described design. We combined two previously published calculators and updated them, and prepared a more convenient version of the conversion calculator of signals and camouflages to bonuses.

In Cooperative battles, the service cost has been further reduced. It will be 13.3% less than what it costs on the main server now.

Increased the size of bonuses and added missing Free XP bonuses for some camouflages and signals.

Bonus to credits of standard permanent camouflages for Tier X ships increased from +45% to +50%.

Credit and XP rewards for performing different actions have been non-linear since the game's release: the first action taken brought more rewards than subsequent actions (e.g. the first 10,000 damage dealt in a battle will earn you more than the next 10,000 damage you deal). This made it easier to earn the base set of rewards and harder to earn more on top of that. With the release of this overhaul, we are increasing the amount that will be easier to get, and slightly lowering the threshold from which it will be harder to get larger amounts. So, for example, it will be easier to get 200,000 base credits (before any modifiers are applied) on Tier X ships. For comparison, using a Tier X ship with permanent camouflage:

These two bonuses even out at 200,000 base credits earned, with the new system being more effective if you earn more. With all the changes, you will receive, on average, the same amount of credits as before, or even more.

The conversion mechanism has been updated. Now, bonuses from signals in sets are counted individually, not by the minimum participation of the signal in the sets.

Let's suppose the account has 250 Equal Speed Charlie London (ESCL) signals. Let's assume that with the other signals, it participates in the sets the following number of times:

Subtract these values from the total number of ESCLs to get the number of bonuses of each type that will participate in further conversion:

In our eagerness to share the details of the upcoming change with you as soon as possible, the calculators we originally shared were not the most user-friendly — first of all, we needed them to show how the conversion works and how the earnings in the current and new systems compare.

Now, we are ready to share a more convenient representation of the conversion calculator. If you are logged into the portal, all your camo and signal stocks will be automatically taken into account and you will be able to know how many bonuses you will get. Please note that the calculator does not take signals and camouflages mounted on ships into account, so with the release of the change you will get a bit more bonuses than the calculator shows. Use one of the following links, depending on your region:

In addition, we have updated the table calculators and merged them into one.

We do not recommend creating your own calculators or modifying the provided one — there might be errors in the formulas. If you are interested in what bonuses you get after conversion, it is more convenient to use the page on the portal. 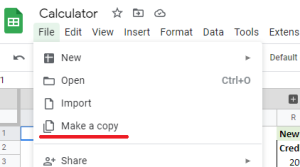 Copy the table to make changes.

The calculator has two parts: conversion calculation and income comparison.

To calculate the bonuses you get during conversion, you need to specify the signals and camouflages you have.

The number of signals is indicated on the "Signals and total stock" sheet, in cells C3:C15 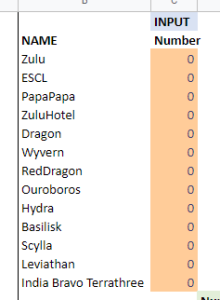 The number of camouflages is specified on the "Camouflages" sheet in cells K4:K122 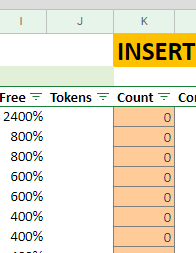 Once you have filled in these cells, the right side of the "Signals and total stock" sheet will show how much and what bonuses you get for sets of signals, for individual signals, and for camouflages, as well as the total score. 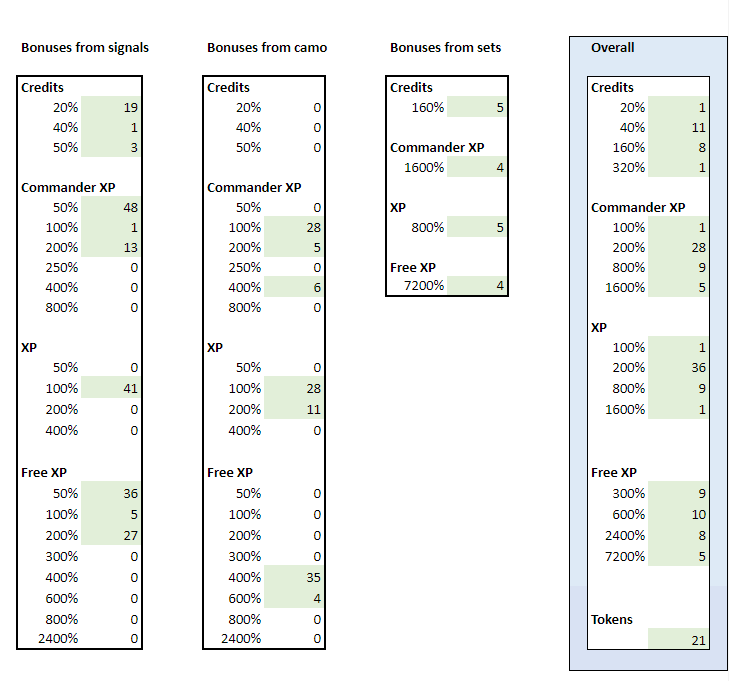 The third sheet — "Difference between systems" — will allow you to compare the rewards received with different bonuses in the current and in the new systems.

In the "Base Credits" and "Base XP" cells, you can enter the base income to which the bonuses will be applied in both the new and the current system. Having a premium account does not affect the relative difference in earnings, so it is not taken into account.

To account for signals and camouflages in the current system, write "1" in the appropriate cells. Select only one camouflage — otherwise, the calculations will be incorrect. 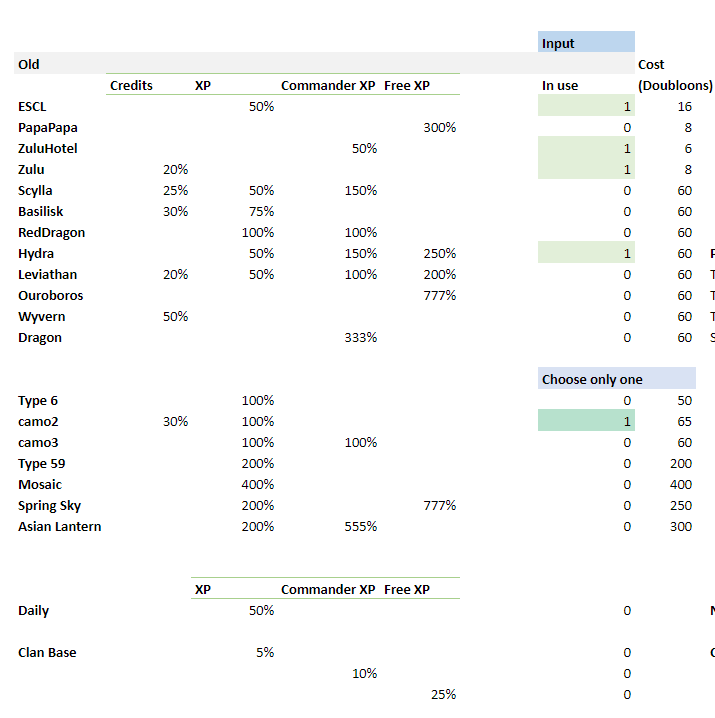 For the new system, always select no more than one bonus of each type

Also, as for the current system, the result of applying bonuses is displayed:

And the final difference between the systems:

What happens to the economic bonuses of permanent camouflages?

3 - The value of the bonus is lower, because the base income of Free XP with the release of the change will be doubled. Thus, all permanent camouflage bonuses of Superships will be higher than in the current system.

In addition, there are a number of permanent camouflages with non-standard bonuses

What will happen with permanent camouflages not bound to a certain ship?

Permanent camouflages attachable to any ships of a certain Tier that were not attached to a ship will be converted into two separate entities:

Will the permanent economic bonuses be better than the standard ones?

We are not planning to make superior economic bonuses available once the change is released; only standard bonuses will be available.

How will expendable camouflages be acquired?

Most expendable camouflages will be permanently available, except for certain ones linked to partnerships, status, or especially rare ones, such as Recruiting Station, King of the Sea, and Gold. Available camouflages can be auto-purchased for credits, as well as in the new "More Camouflages" container. It will be available as daily containers, for Community Tokens, and in different bundles or combat missions.

Camouflages will cost between 22,500 and 90,000 credits, depending on the category of the pattern:

What will be the price of economic bonuses?

The following bonuses will be available for auto-purchase:

Comparison of the use of purchasable bonuses:

Will it be possible to sell economic bonuses and expendable camouflages?

You will be able to sell economic bonuses and purchasable camouflages for credits.

With the release of the change the following daily containers will be available:

Camouflages will drop from More Camouflages and from Try your Luck containers.

What will become of economic and special signals?

With the release of the update, these signals will be removed from the game. However, many players like it when their ship carries a large number of signals. Now, we are thinking about different options for additional decorations for ships through various customization elements. It is too early to talk about any specific options or details, because these are still only just ideas. However, there is a possibility that the signals removed from the game may appear in the future as one of these visual elements.