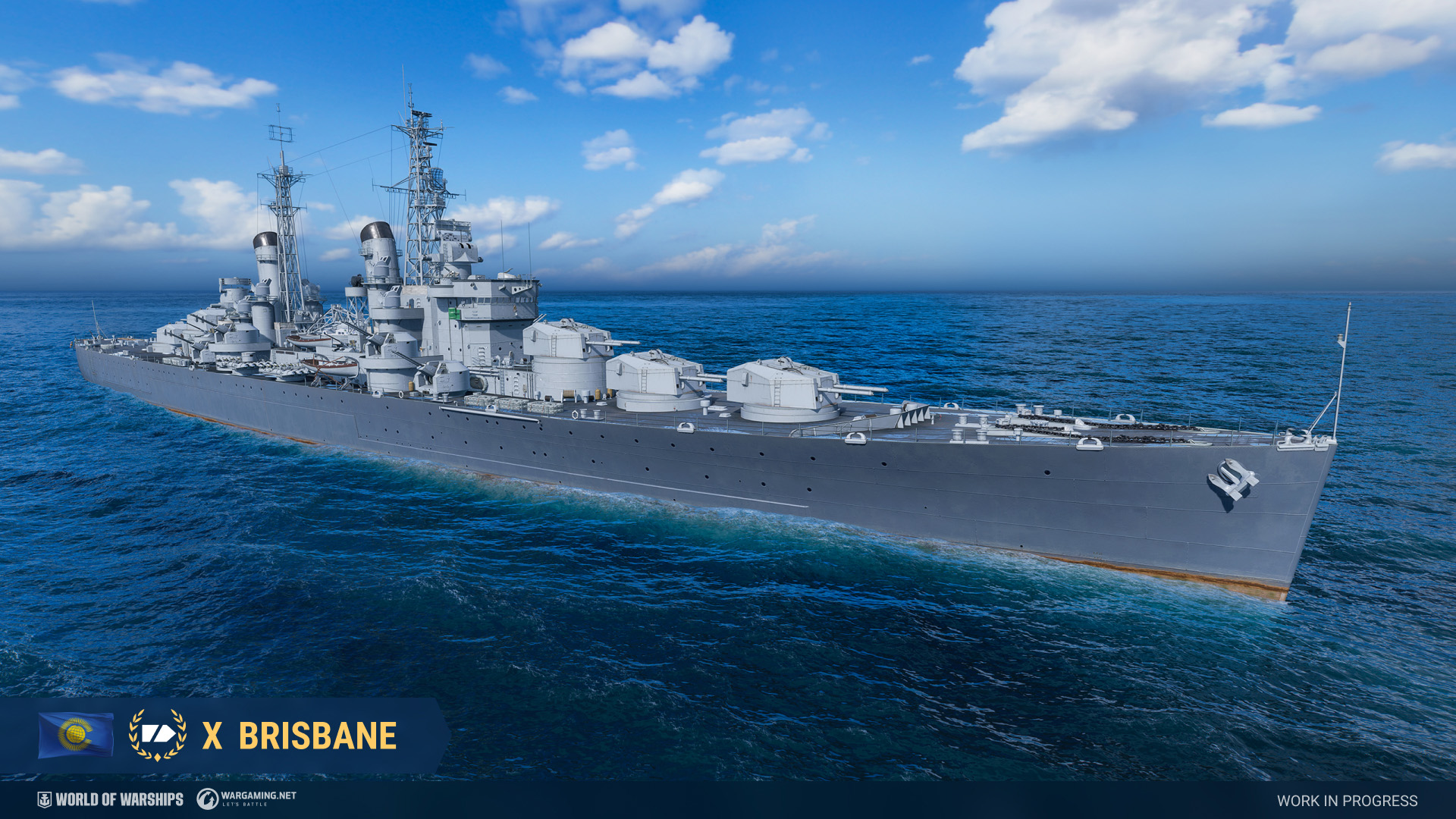 A project for a light cruiser developed after the end of World War II that would have been equipped with powerful and advanced AA defenses, thanks in part to its main battery of ten quick-firing 152 mm dual-purpose guns.

Brisbane resembles Minotaur but with access to HE shells and a reinforced torpedo armament that can launch a greater number of torpedoes. The torpedoes themselves have a higher range and speed than those of the ship’s British counterpart. Not all differences are advantages, however, as Brisbane’s AP shells lack the improved characteristics that Minotaur’s have.

This cruiser poses a serious threat at medium distances, especially for enemy destroyers due to her Hydroacoustic Search and Surveillance Radar consumables. At the same time—as most Minotaur captains can attest to—Brisbane’s armor is not the sturdiest, and unlike Minotaur, this ship cannot switch out her Surveillance Radar for a Smoke Generator for an added layer of security. In case of heavy damage, though, she can restore a large part of her lost HP with the Specialized Repair Teams consumable.

The Royal Australian Navy, which took shape at the dawn of the 20th century, adopted its own distinct tradition for naming warships. Light cruisers in particular were named after the capital cities of Australia’s states:

Sydney currently has the honor of having the most warships named after it—in addition to the two cruisers mentioned above, the name also adorned an aircraft carrier (1948-1973) and a missile frigate (1983-2015). Melbourne has the second place in this category, and we decided to give the cruiser, that could have been built in the late 1940s, the name of the third largest city, Brisbane. 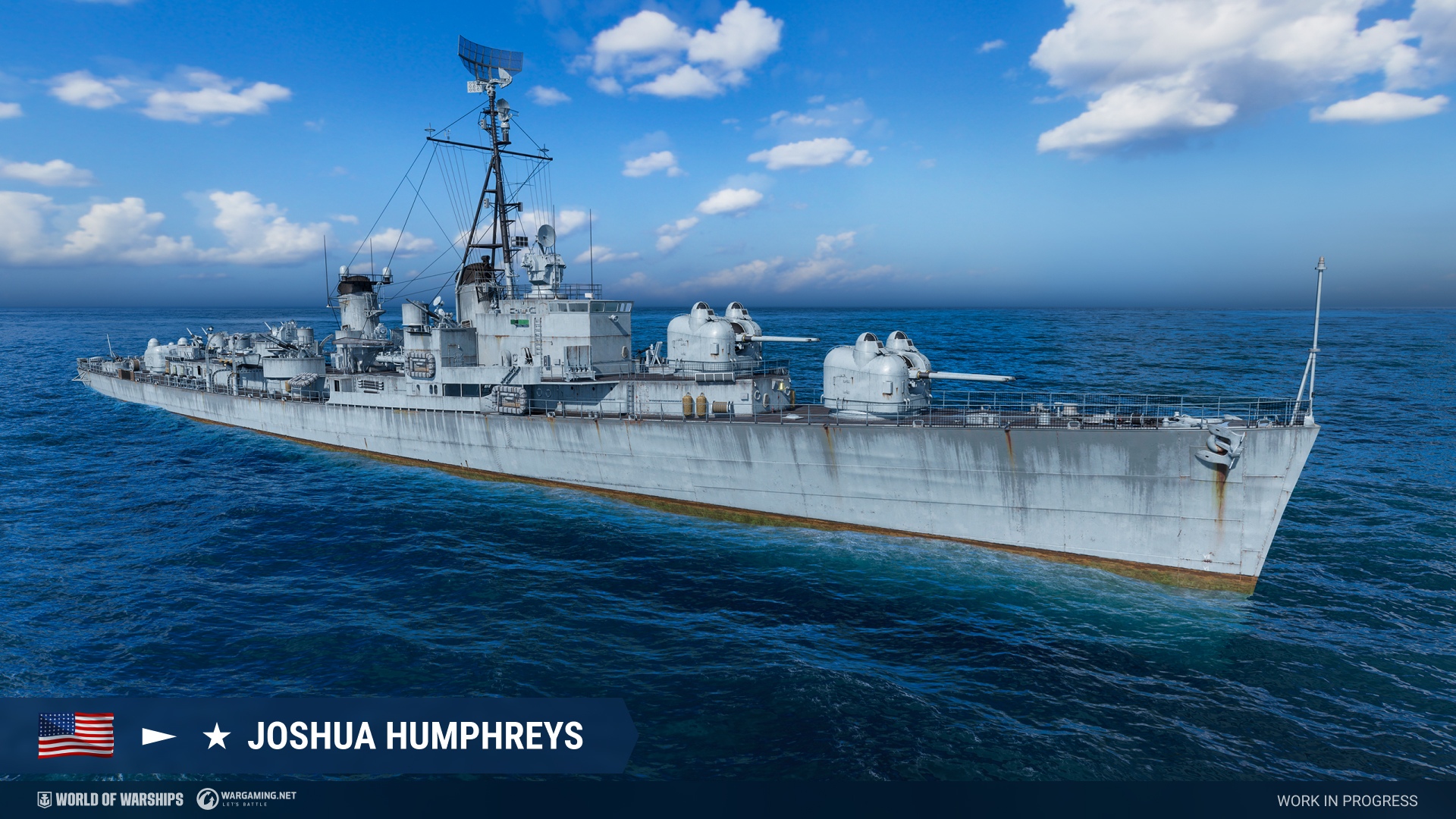 Joshua Humphreys is a faster and more agile ship with six main battery guns and access to the “Burst Fire” alternative firing mode. In addition to a greatly increased fire rate, the alternative mode grants a temporary bonus to HE shells' damage and chance to set fire. The ship’s strong gunnery and large HP pool allow her to effectively contest Key Areas while posing a serious threat to enemy destroyers.

The torpedo armament has a high range, but not the greatest speed and damage. Joshua Humphreys stands out for her good concealment and access to the signature American Smoke Generator consumable with a long smoke screen dispersion time. The remainder of her arsenal of consumables is composed of an Engine Boost and Defensive AA Fire in the same slot.

Starting with the first American class of destroyers in 1899-1903, these types of ships in the US Navy are traditionally named after naval commanders and servicemen. Over time, the honor was expanded to include the Marine Corps and Coast Guard, secretaries of the Navy, members of the Department of the Navy, and senators.

The naval engineer known as the “Father of the American Navy,” who designed and built US Navy’s first six frigates shortly after the nation achieved its independence—Joshua Humphreys (1751-1838)—gave name to only one Clemson-class destroyer (1920-1945). Therefore, we decided to honor him with a new destroyer from the second half of the 1940s. 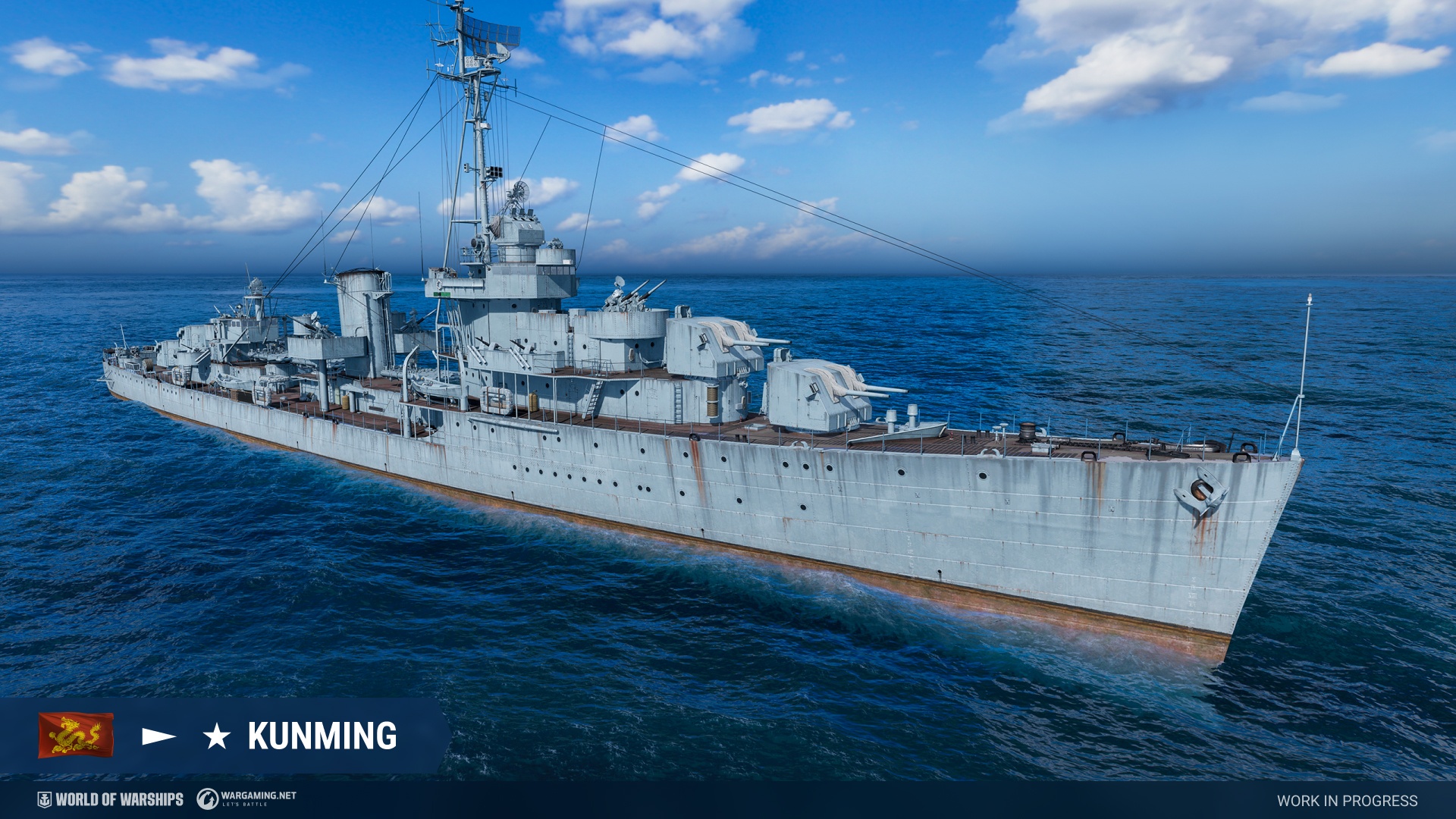 An evolution of the American Somers-class, this destroyer is fast, well-armed, and features enhanced torpedo and anti-aircraft armament.

Kunming follows the gameplay concept of existing researchable Pan-Asian destroyers. The main difference between this ship and Yueyang is an additional main battery turret, a longer firing range, and more torpedo tubes. Her powerful deepwater torpedoes that have a low detectability and an increased chance to cause flooding are suitable for performing stealthy torpedo attacks on large targets.

Thanks to her Smoke Generator with a large number of charges and accelerated cooldown, this superdestroyer can effectively fight for control of Key Areas and make a quick retreat in case of a bad engagement. The Surveillance Radar consumable is available as an alternative to Smoke Generator in the same slot, which gives its own advantages in hunting enemy destroyers and supporting allies. It’s important to remember that the ship has a rather small HP pool and a below-average damage per second on her main battery guns.

Kunming also has access to the Engine Boost and Torpedo Reload Booster consumables in separate slots.

At the beginning of the 20th century, warships in the Chinese fleet were given figurative names. For example, in 1912, three destroyers were Yu Chang—Camphor tree, Chien Kang—Creation of wellbeing, and Tung An—Universal peace. However, large Chinese ships that entered service before the start of World War II received geographical names: cruiser Ning Hai was named after the peninsula on the northern coast of Shandong province, and cruiser Ping Hai was named after the bay in the southeast of Fujian province.

In the post-war decades, this became the tradition. For example, Chinese destroyers are named after large and medium-sized cities. One of them is Kunming—the administrative center of Yunnan province of southwest China.