A researchable branch of Pan-American light cruisers will be added to the game. We're sharing the first details.

The new branch will consist of ships and projects originating from different Latin American countries: Argentina, Brazil, Chile, Peru, Colombia, and Mexico. Please note that the branch is currently under development, so the models of some ships are still not finalized, and the gameplay concept of the branch may change during the testing, which is planned to begin in early 2023.

The new ships' main battery guns will have a medium firing range and good ballistics which make them effective at any distance. The guns also have a decent rate of fire. The cruisers' torpedoes have average characteristics. Thier good concealment will allow them to get into a good position and be the first to strike when conditions are favorable or to safely retreat, if necessary.

A distinctive feature of the branch will be the presence of Combat Instructions. However, the branch concept is still under development, so we'll share more details once it is closer to completion.

Ship consumables will include Repair Party and a choice between Hydroacoustic Search or Defensive AA fire in a single slot. 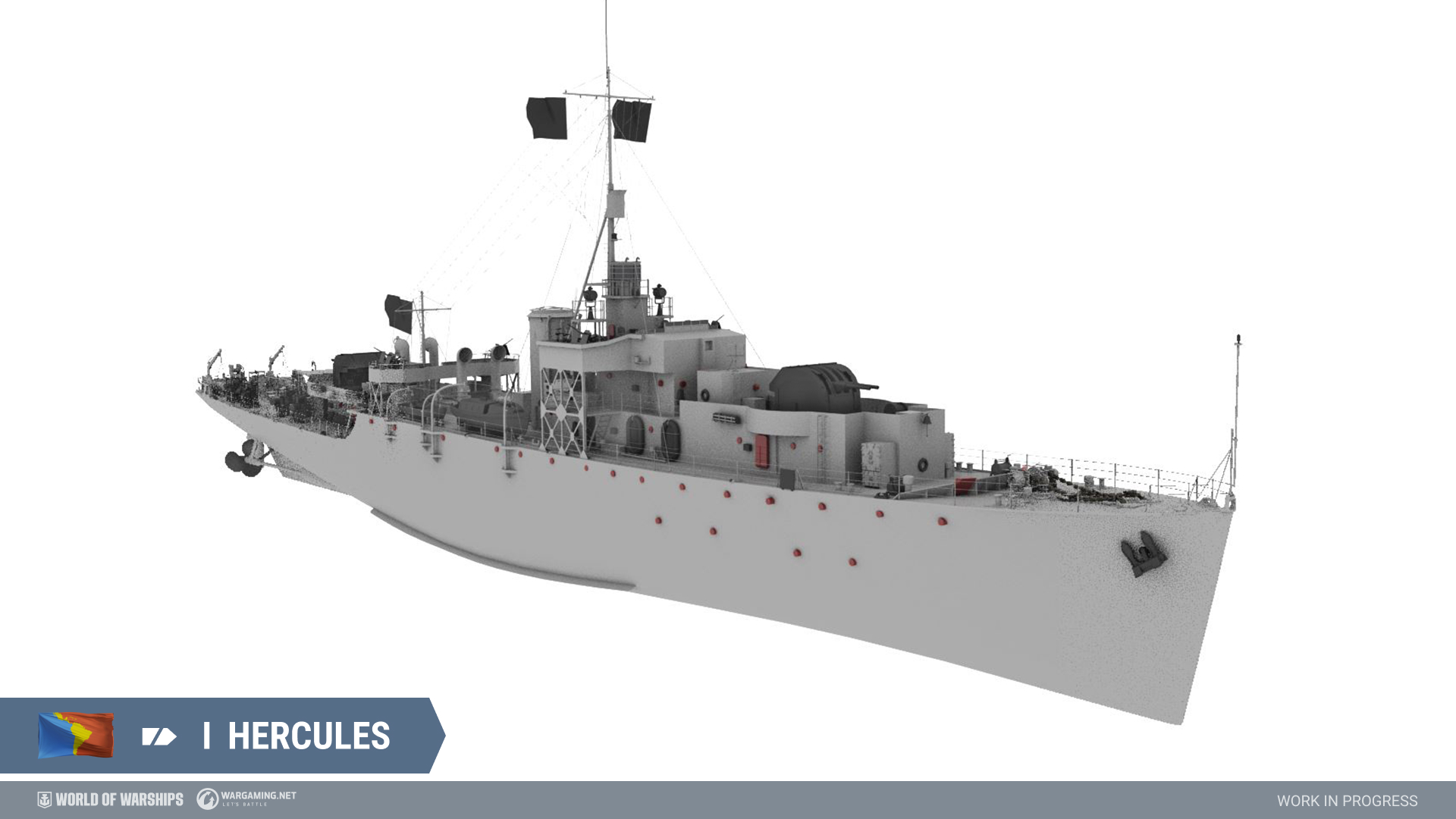 A River-class frigate built in Canada in 1942 for the British Navy under the name HMS Adur. That same year, she was transferred to the US Navy, where she was renamed USS Asheville, and took part in the Battle of the Atlantic. After the war, she was decommissioned from the US Navy and, in 1946, sold to Argentina, where it was at first named Hercules, and from 1961, Juan B. Azopardo. She served in the Argentine Navy until 1969. 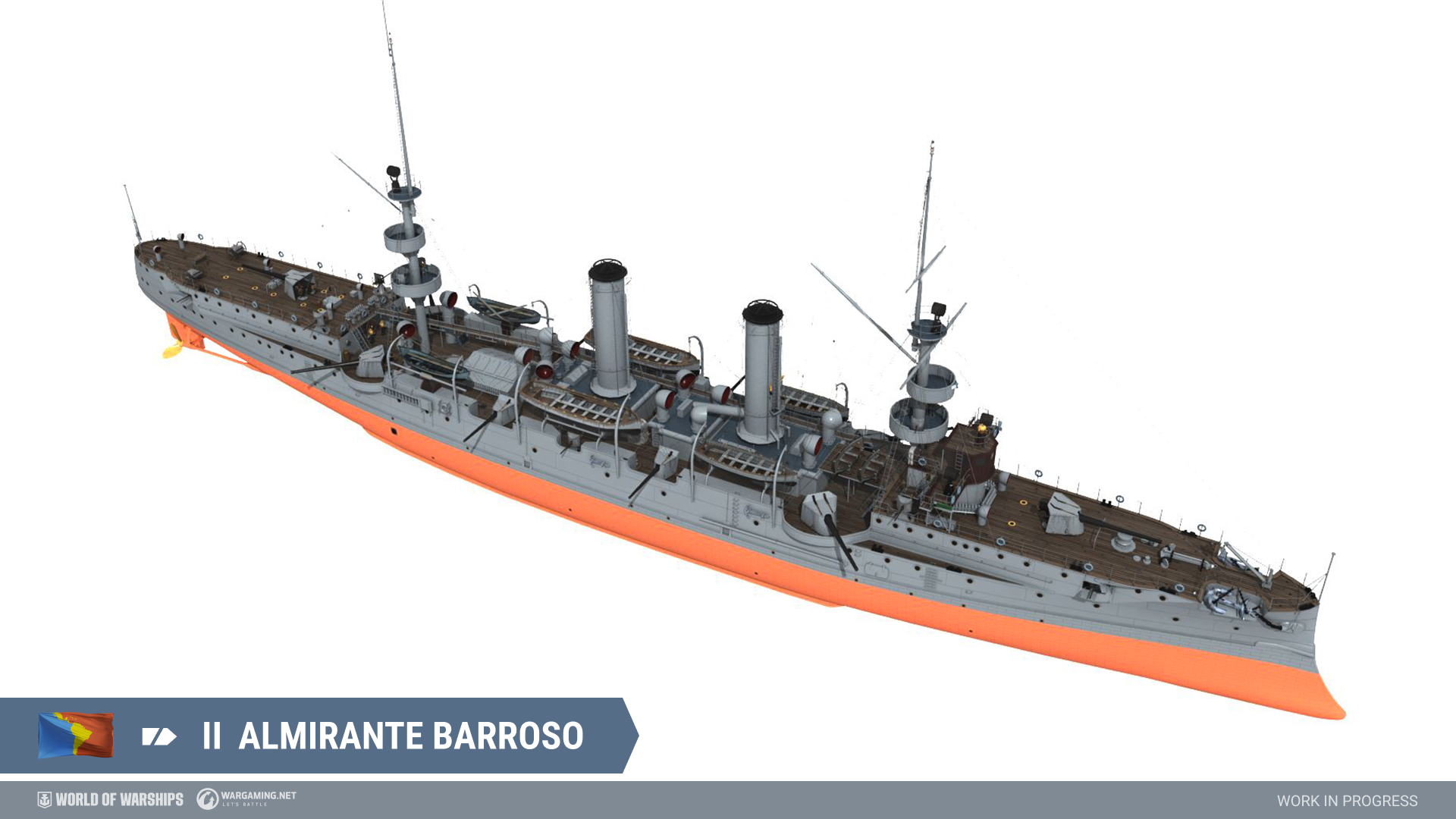 The Armoured Cruiser Almirante Barroso was built by order of Brazil in Great Britain and served in the Brazilian Navy between 1896 and 1931. She was named after the famous Admiral of the Imperial Brazilian Navy who bore the title Baron of Amazonas. She entered has gone down in history as the first Brazilian ship to be equipped with a radiotelegraph. 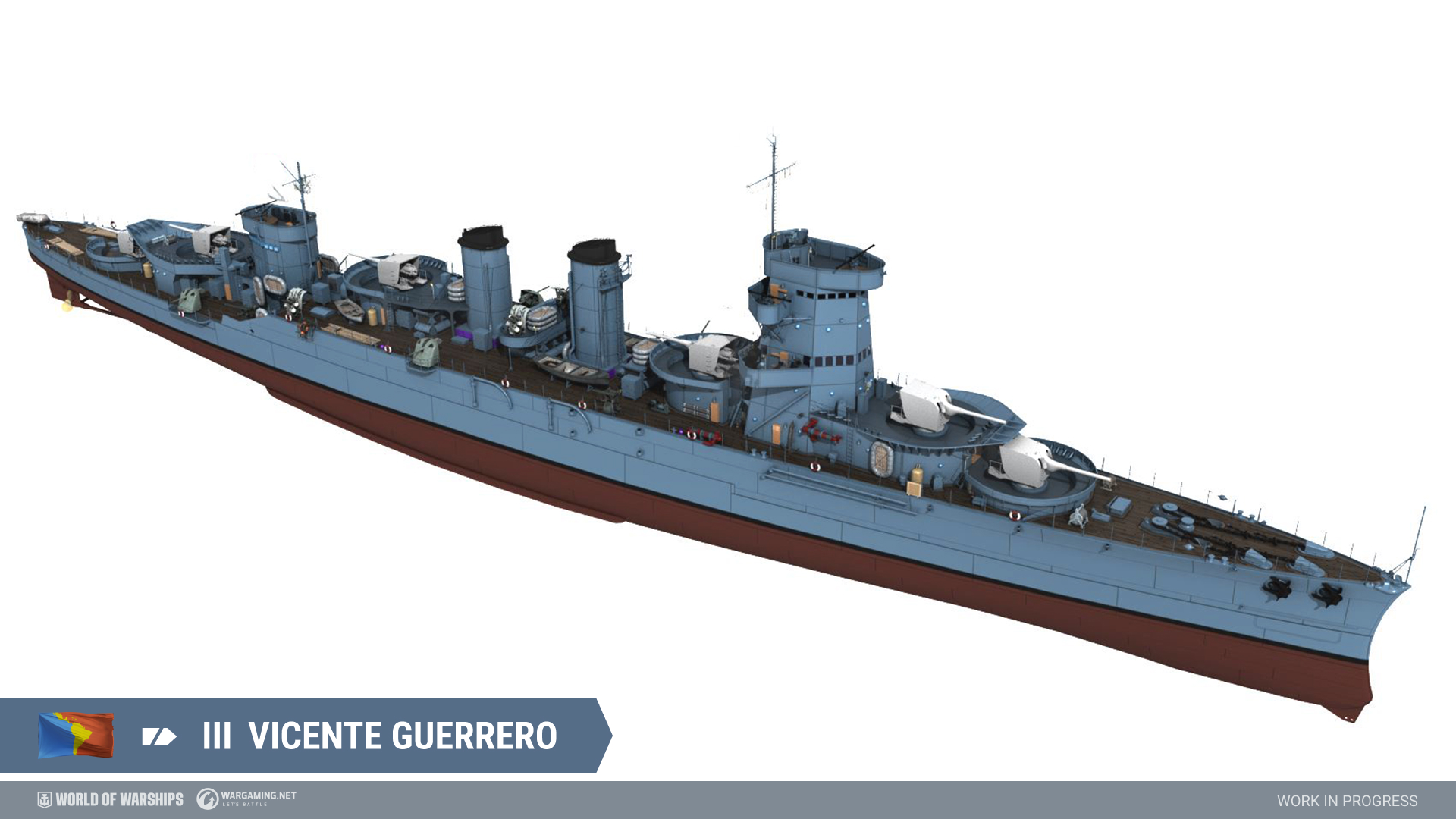 This is a version of the light cruiser Navarra that served in the Spanish Navy from 1923 to 1956. This Spanish-built ship was based on the British Birmingham-class light cruisers (three ships entered service in 1914), which were the most advanced and successful British cruisers of the time. She was laid down in 1915, first named Reina Victoria Eugenia, and in 1931-1936 re-named República. With the beginning of the Spanish Civil War, it came under the control of the Nationalists and once again re-named Navarra. It had good navigability and relatively high speed for the 1920s. Since Mexico ordered gunboats and patrol ships from Spain in the first half of the 1930s, it can be assumed that they could have also purchased a ship of this type. 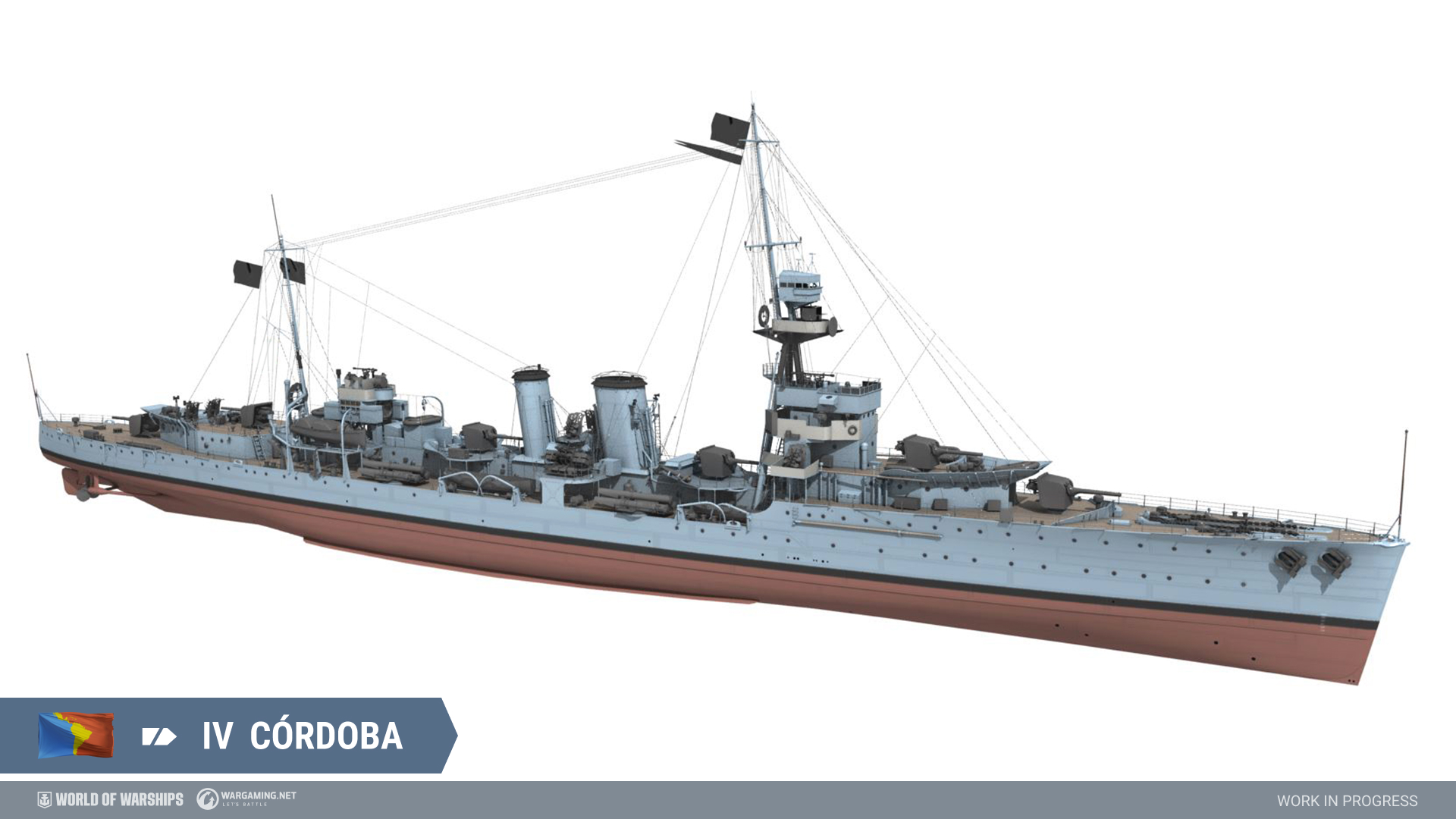 This ship is the equivalent of the British Tier IV cruiser Danae. In 1925, two D-class cruisers were transferred to New Zealand, and in 1943-1944 two more were to the Polish Navy. By the early 1930s, the D-class light cruisers (a total of 8 were built) were already outdated and could be sold or transferred to a friendly country. As for the name, in the 20th century, a number of Colombian Navy ships were also known as Córdoba, named after a town in the Bolivar department. 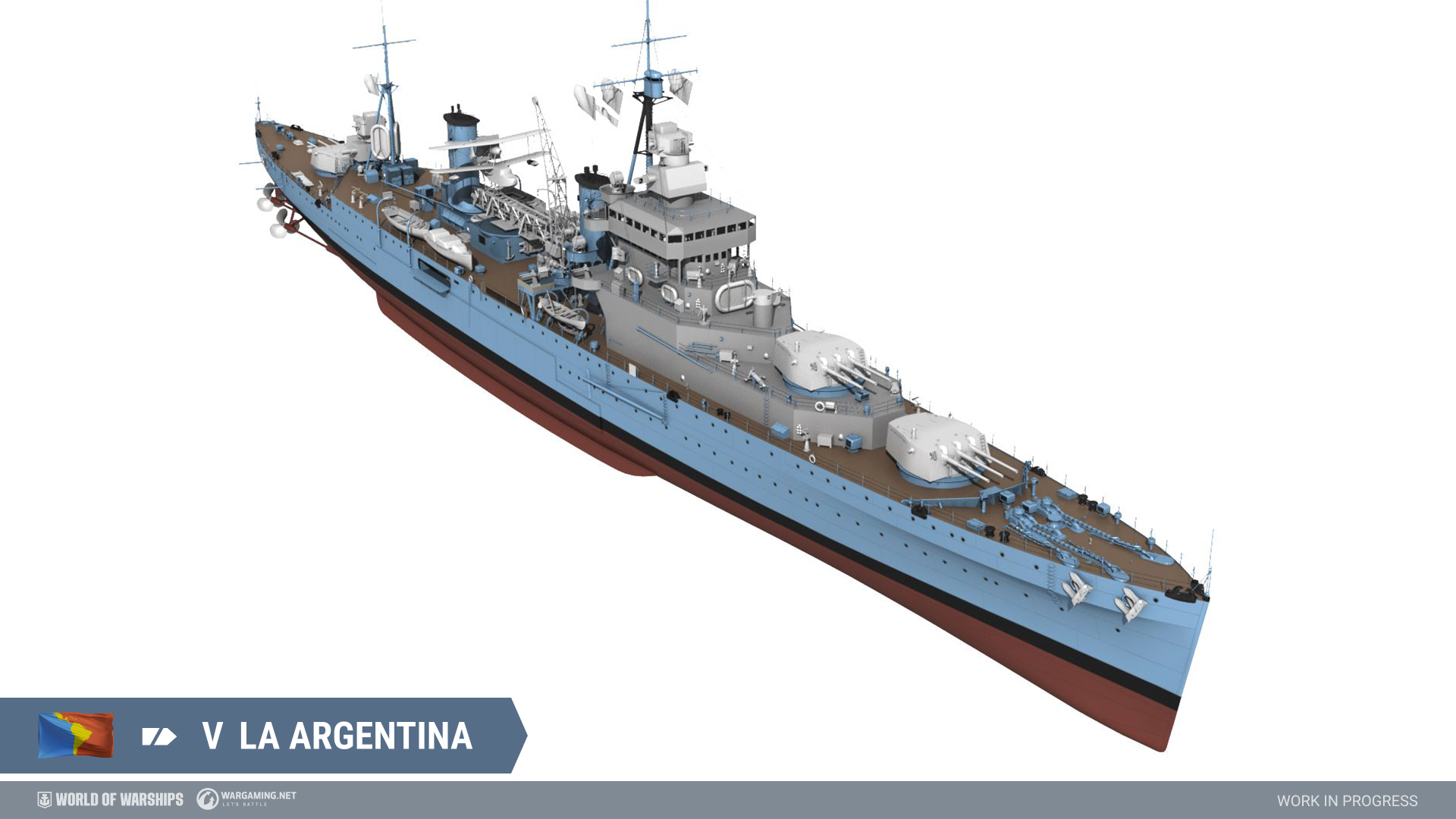 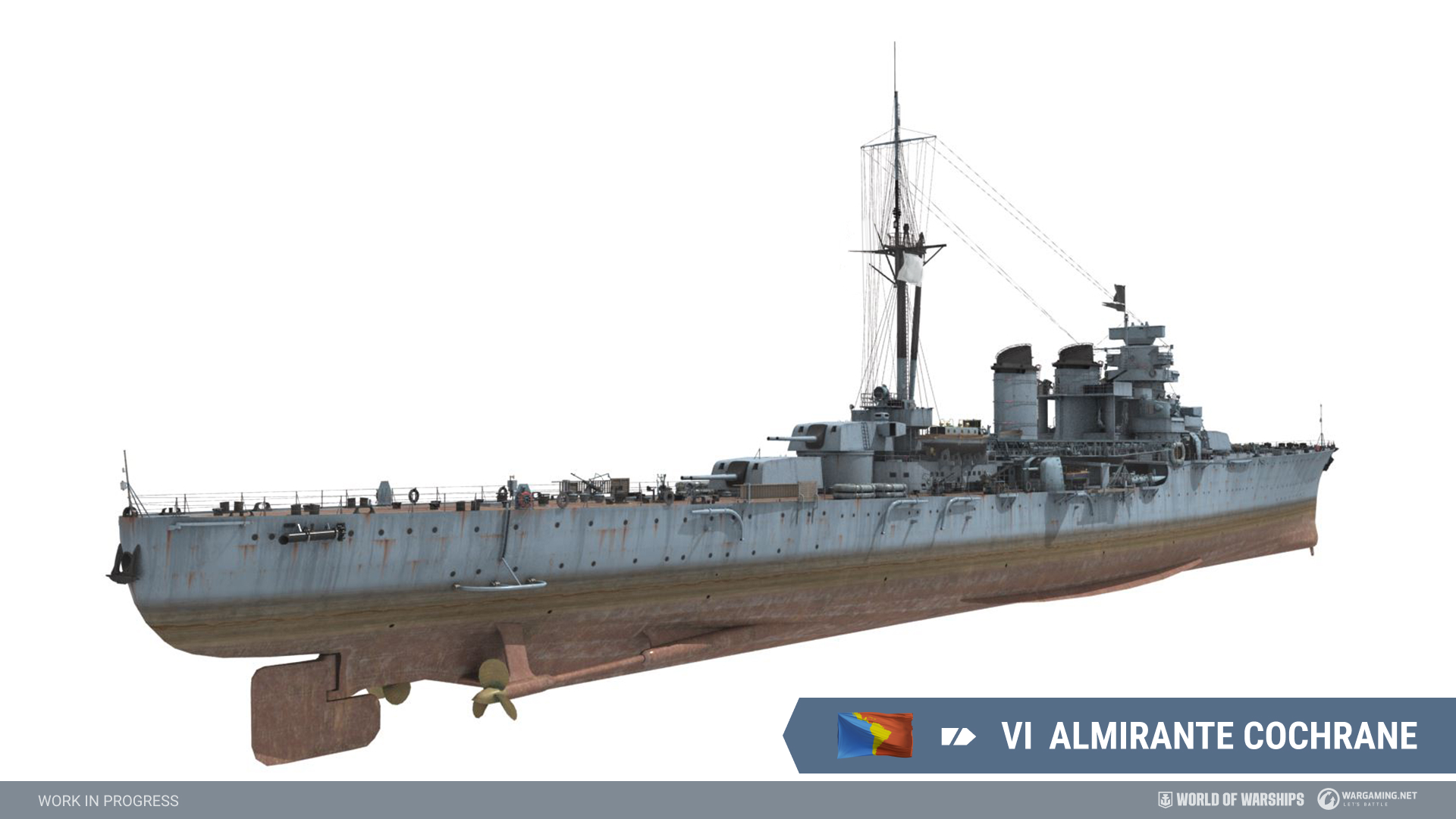 This ship is the equivalent of the Italian premium Tier VII cruiser, Duca degli Abruzzi. The main difference is the number of main guns—Abruzzi has two 3-barreled and two 2-barreled 152mm turrets, while the Cochrane has four 2-barreled ones. Ships of the Chilean fleet were generally ordered from other countries, so it can be assumed that a smaller version of the cruiser Duca degli Abruzzi could have been ordered from Italy.

Thomas Cochrane (1775-1860)—Famous British admiral and hero of the Chilean War of Independence against Spain in 1818-1822—is considered the father of the Chilean Navy. 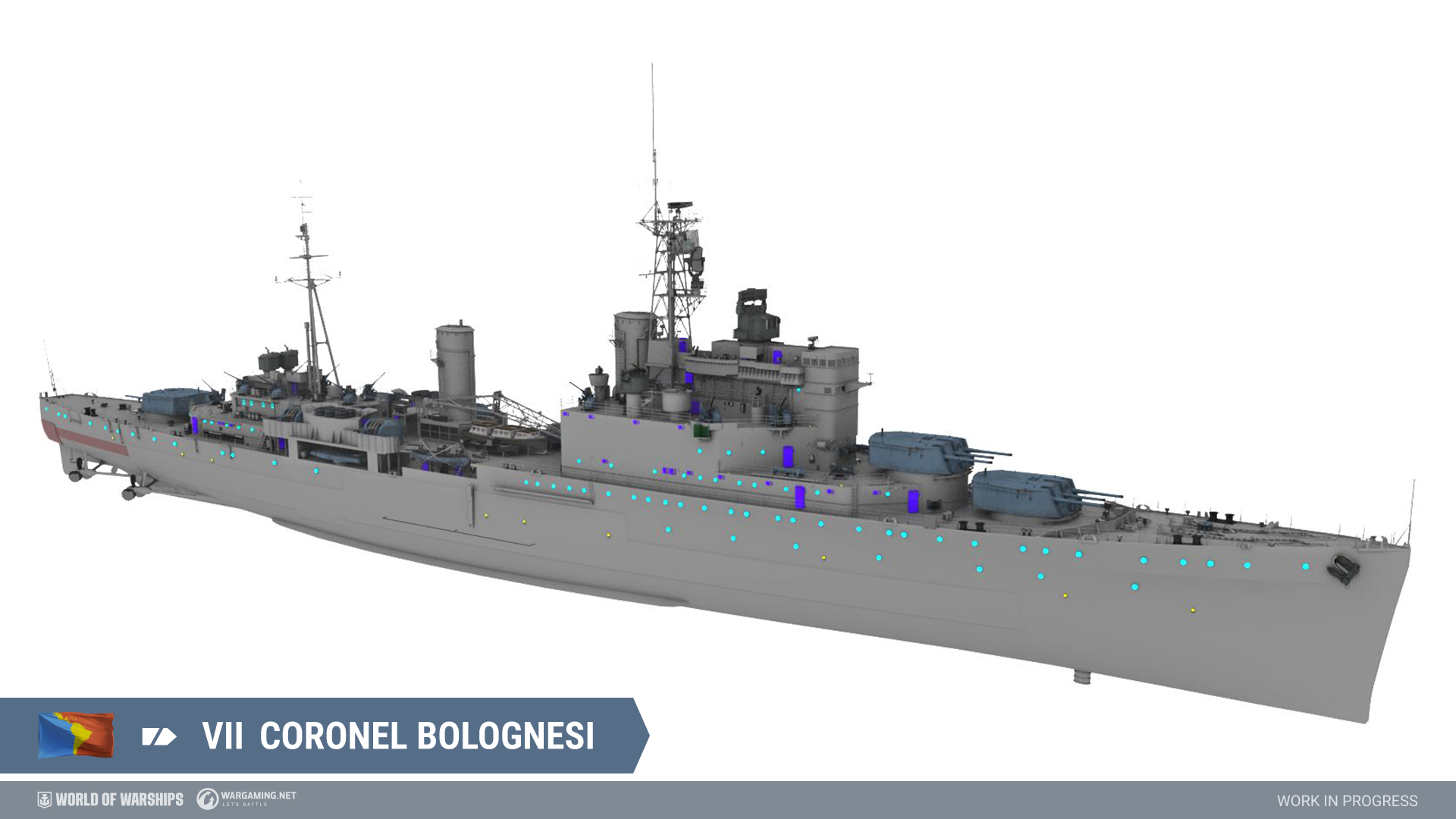 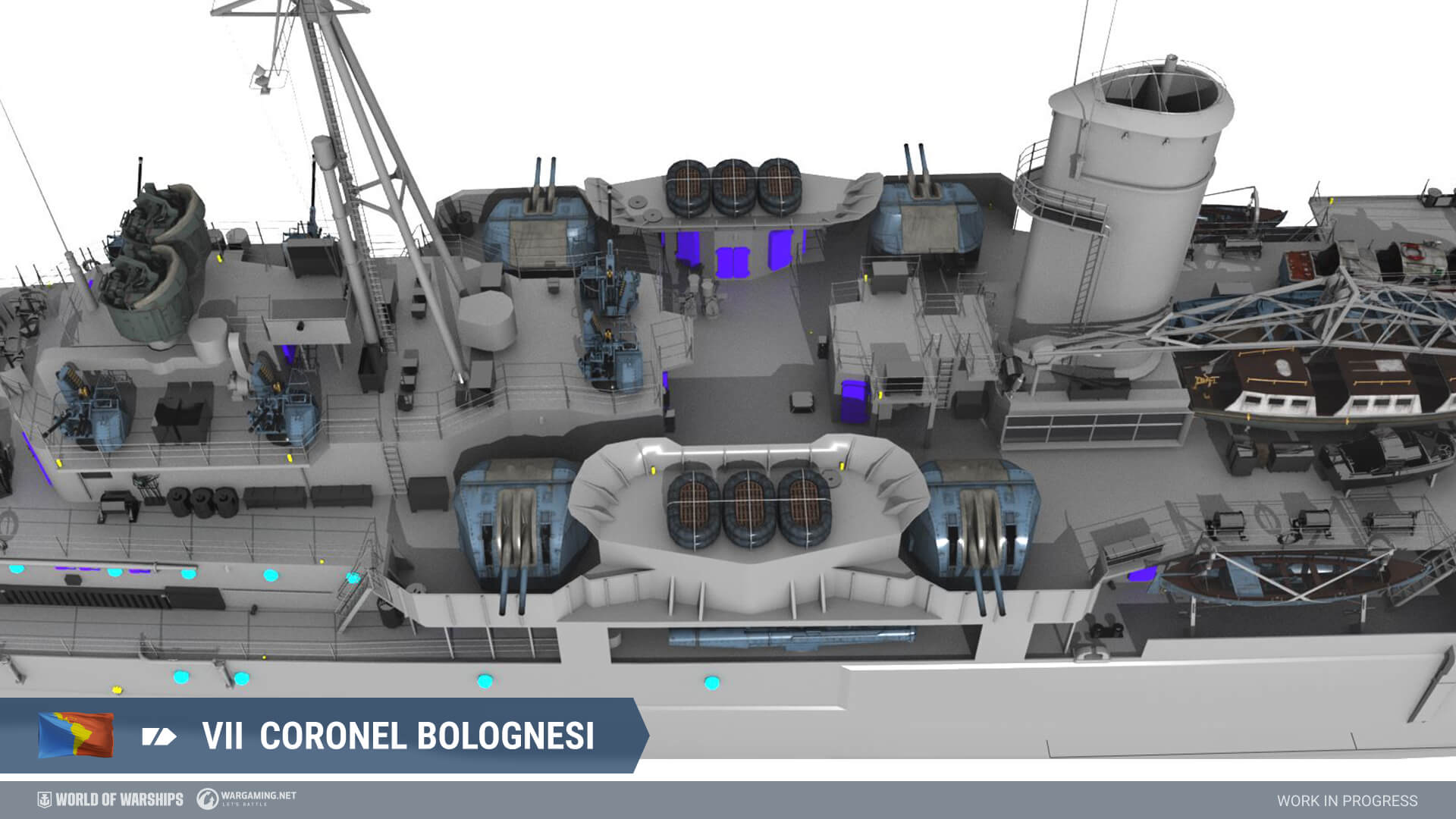 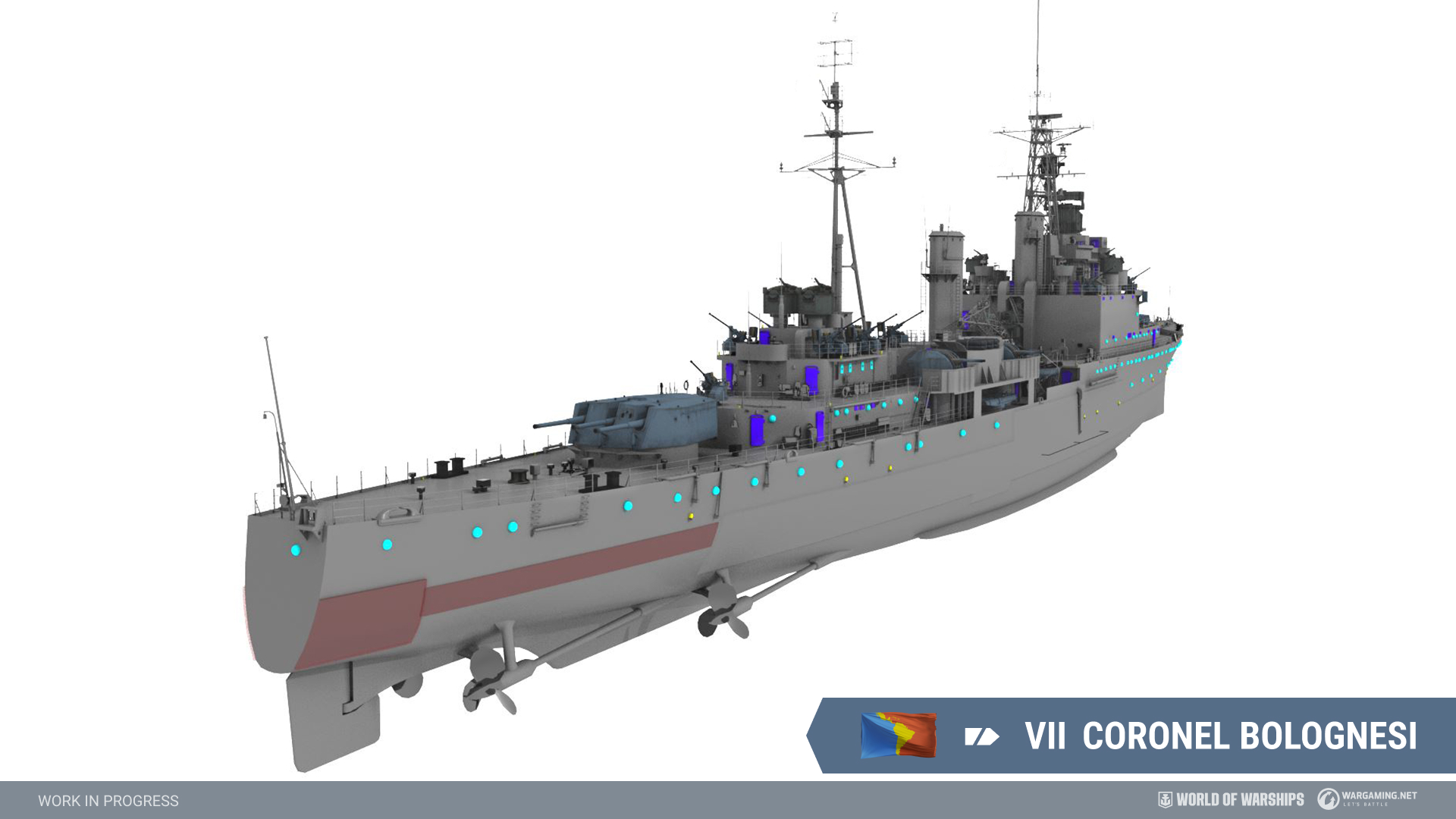 A Fiji-class light cruiser that was built in Britain and entered service in the Royal Navy in 1943 under the name HMS Ceylon. She was transferred to the Peruvian Navy in 1960 and is named after the Peruvian national hero Colonel Francisco Bolognesi (1816-1880). The cruiser Coronel Bolognesi served until 1985. In-game, she is presented as of 1960. 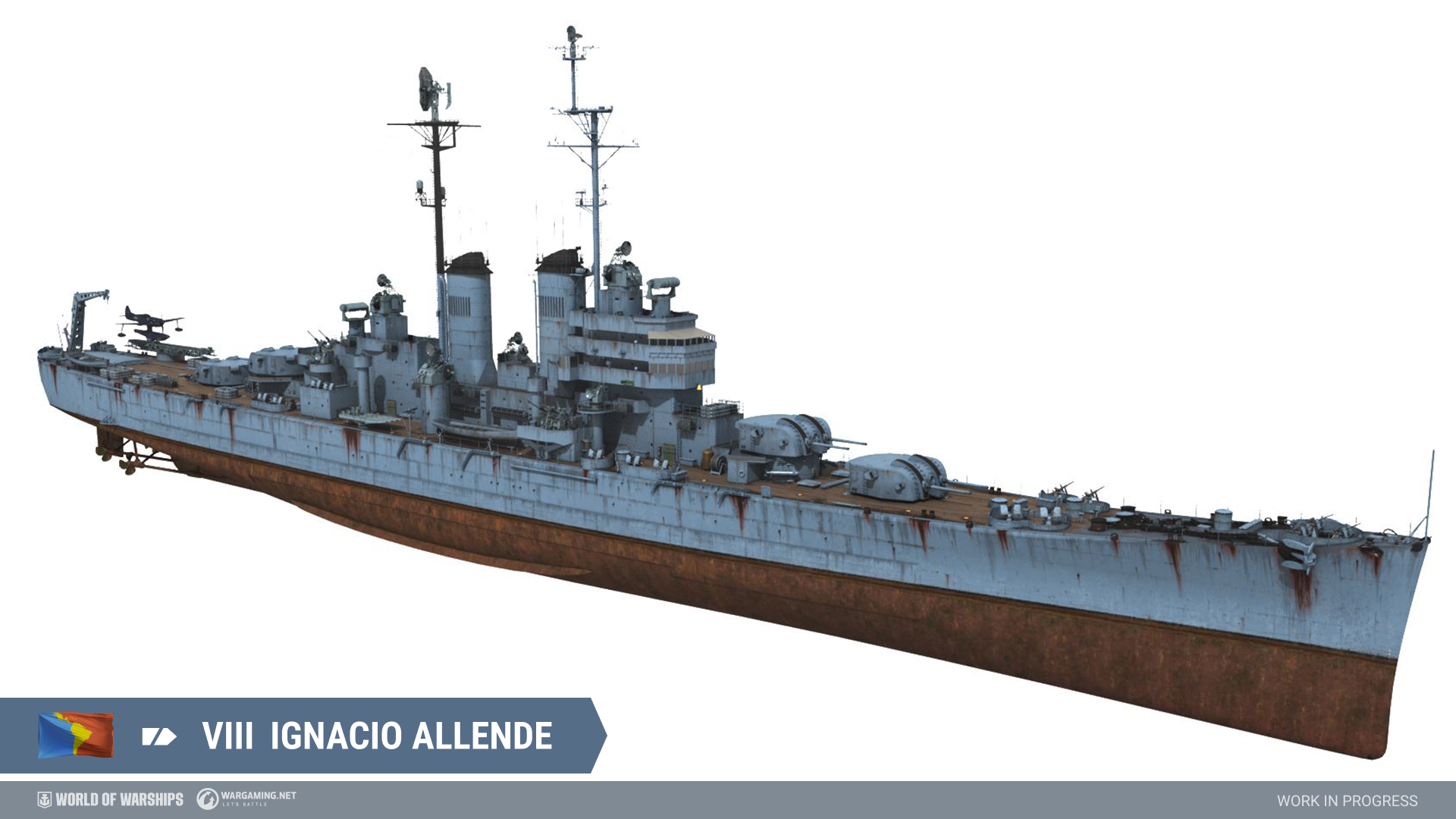 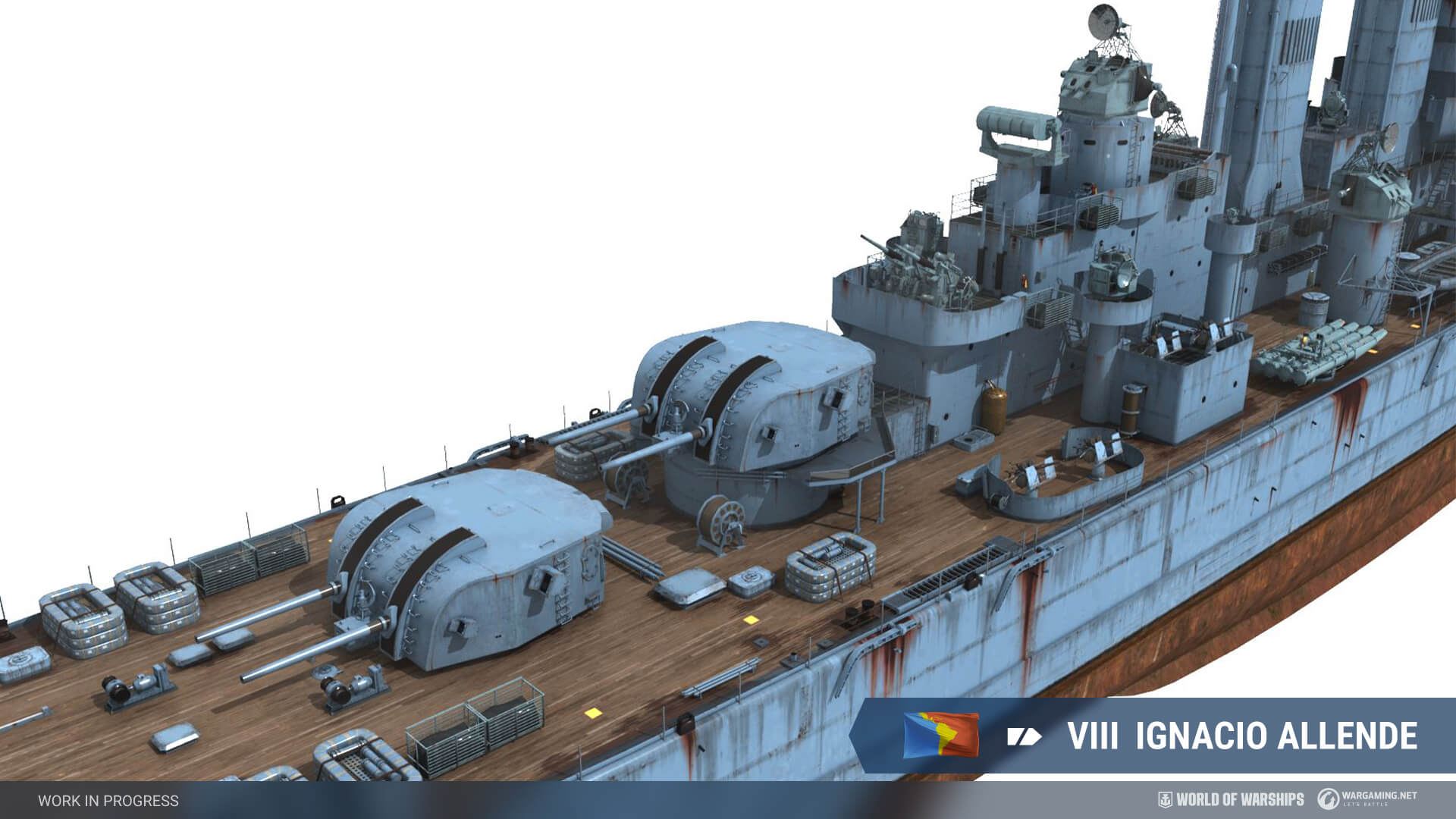 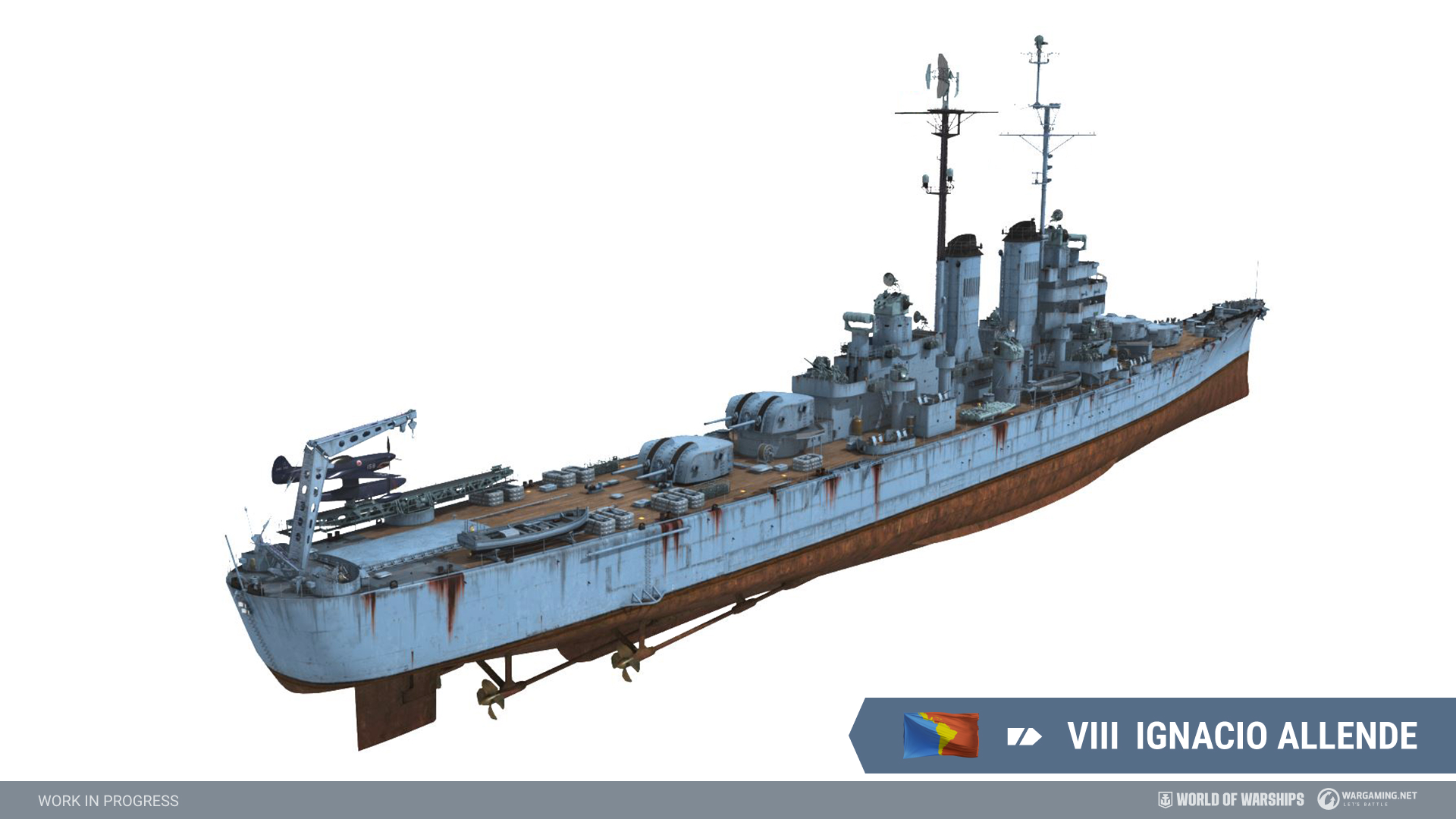 From August 1941 to July 1943, American designers prepared 9 draft versions of this cruiser, armed with 152-mm Mk 16DP guns in twin mounts. Most of them, according to the Department of the Navy requirements for the number of main guns, carried 5-6 of such turrets. The problem was that the installation of so many 200-ton emplacements and the corresponding ship's armor, resulted in a displacement and size increase that was quite excessive for a light cruiser. Attempts had been made to correct it by reducing the number of main guns: in August 1941 and spring 1943, drafts under the letters C and H were prepared, where the main caliber was made up of 8 guns in 4 turrets. In reality, they were rejected because, in the opinion of the General Board of the US Navy, the ratio of displacement to the number of guns made such a ship inefficient. As a result, the Worcester-class with its 6 turrets, built by 1948, was the largest light cruiser in world history, comparable to the heavy cruiser Baltimore. Our model shows what this type of cruiser, with four 152mm twin main battery turrets, might have looked like had it been built in 1948.

After World War II, the United States widely practiced the transfer of warships to other nations. These were ships put into reserve after the end of the war that were often quite modern surface combatants: aircraft carriers were transferred to France, cruisers to Argentina, etc. For example, Mexico received 4 Tacoma-class frigates and 14 submarine hunters in 1947. Based on this, we can assume that the Mexican fleet could also be strengthened by the latest US-built light cruiser—not quite as huge as the actual Worcester, but quite suitable for the role of the most powerful ship in Central America. 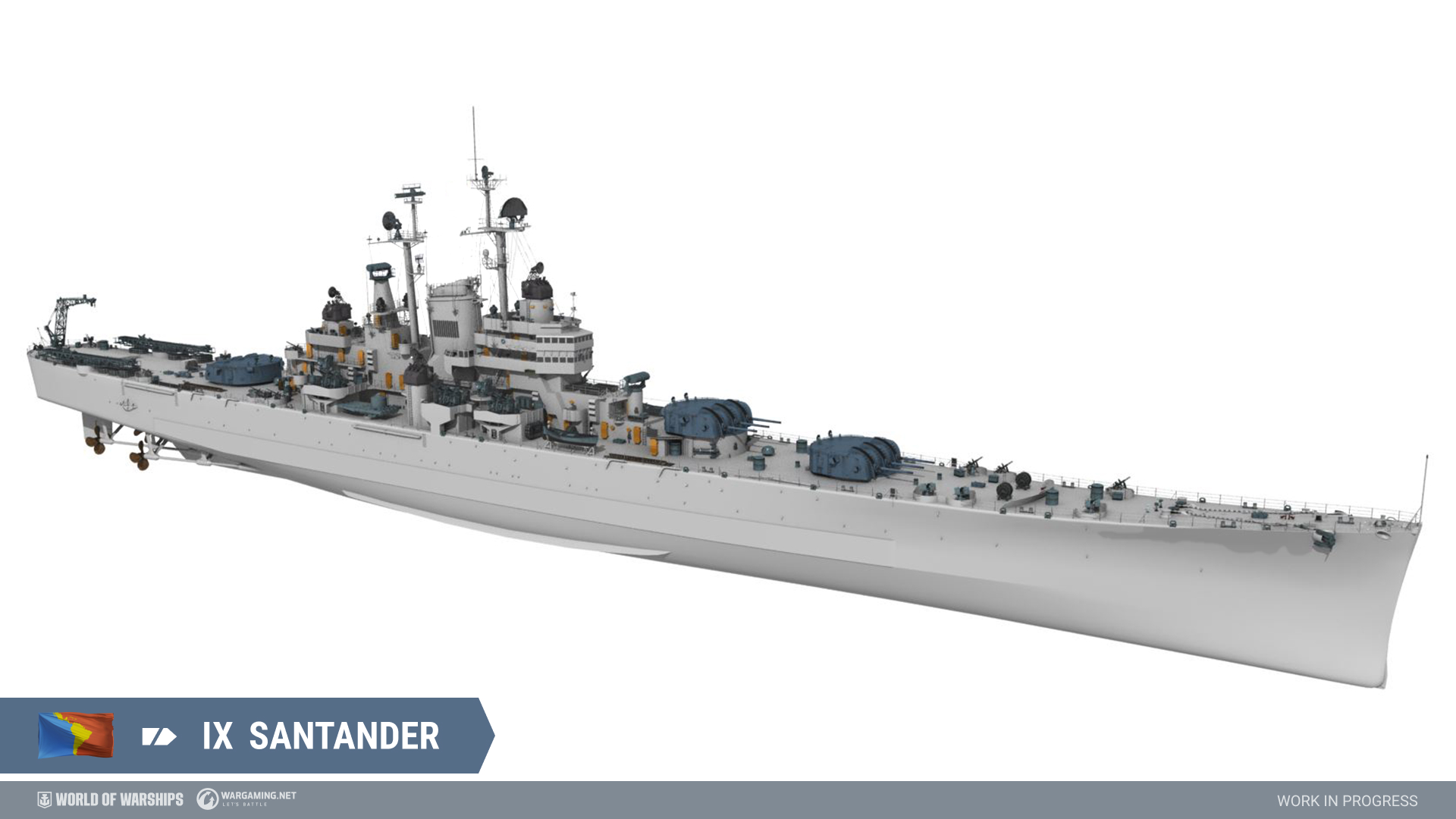 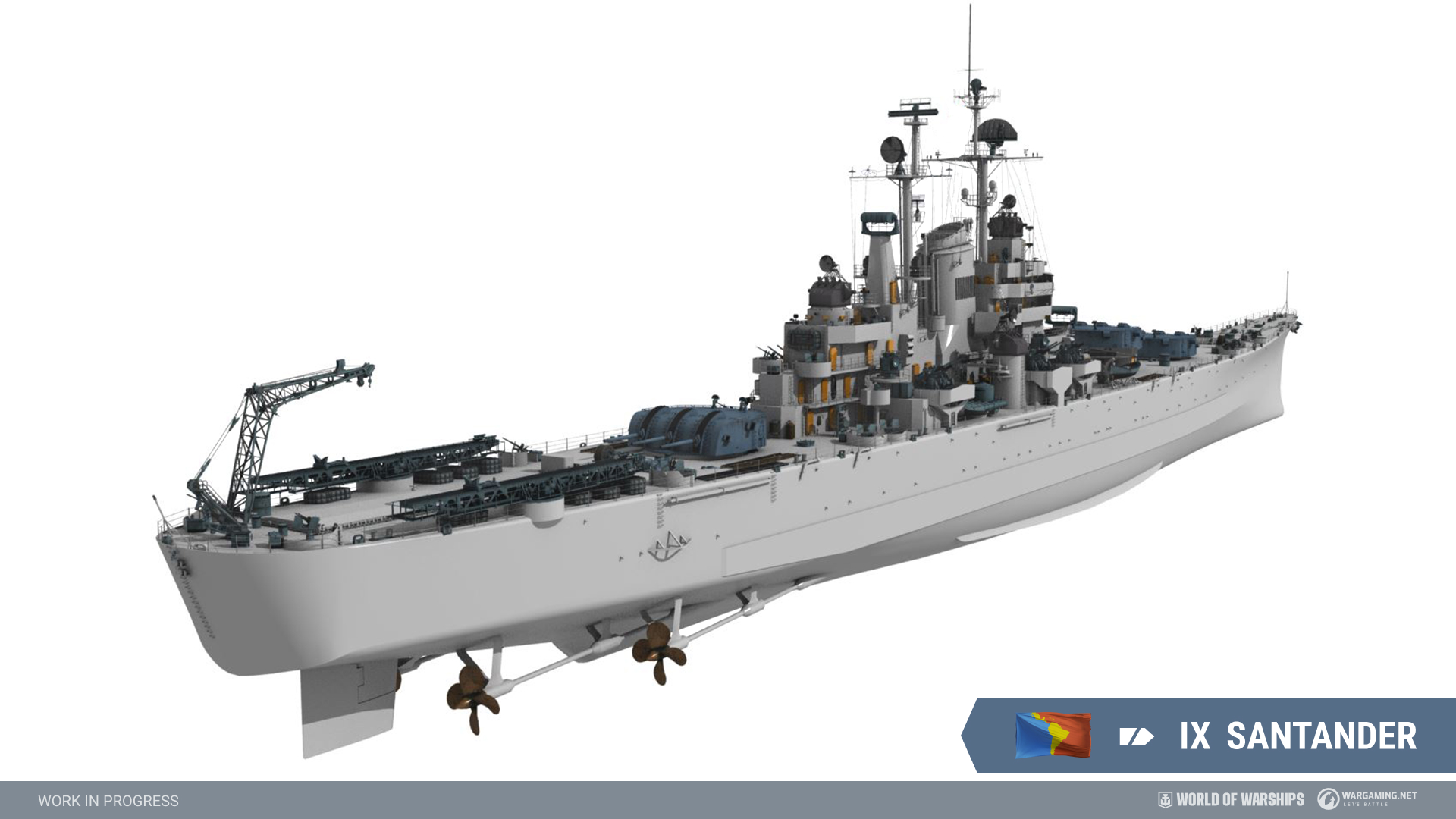 One of the preliminary designs of the Worcester-class cruiser from 1948. During the preliminary design process, the US Department of the Navy considered the possibility of building a 3-gun 152-mm main battery turret instead of the final twin turret for this cruiser. But the idea was abandoned due to the complexity of the task and the uncertainty of the terms of its implementation. The Santander is a model of what a Worcester-type cruiser with three triple 152mm turrets could have looked like by 1948.

The Colombian Navy could have received such a cruiser from the US with the same logic as Mexico could have with Allende. The ship is named after the national hero of Colombia, hero of the War of Independence, and President Francisco de Paula Santander (1792-1840). 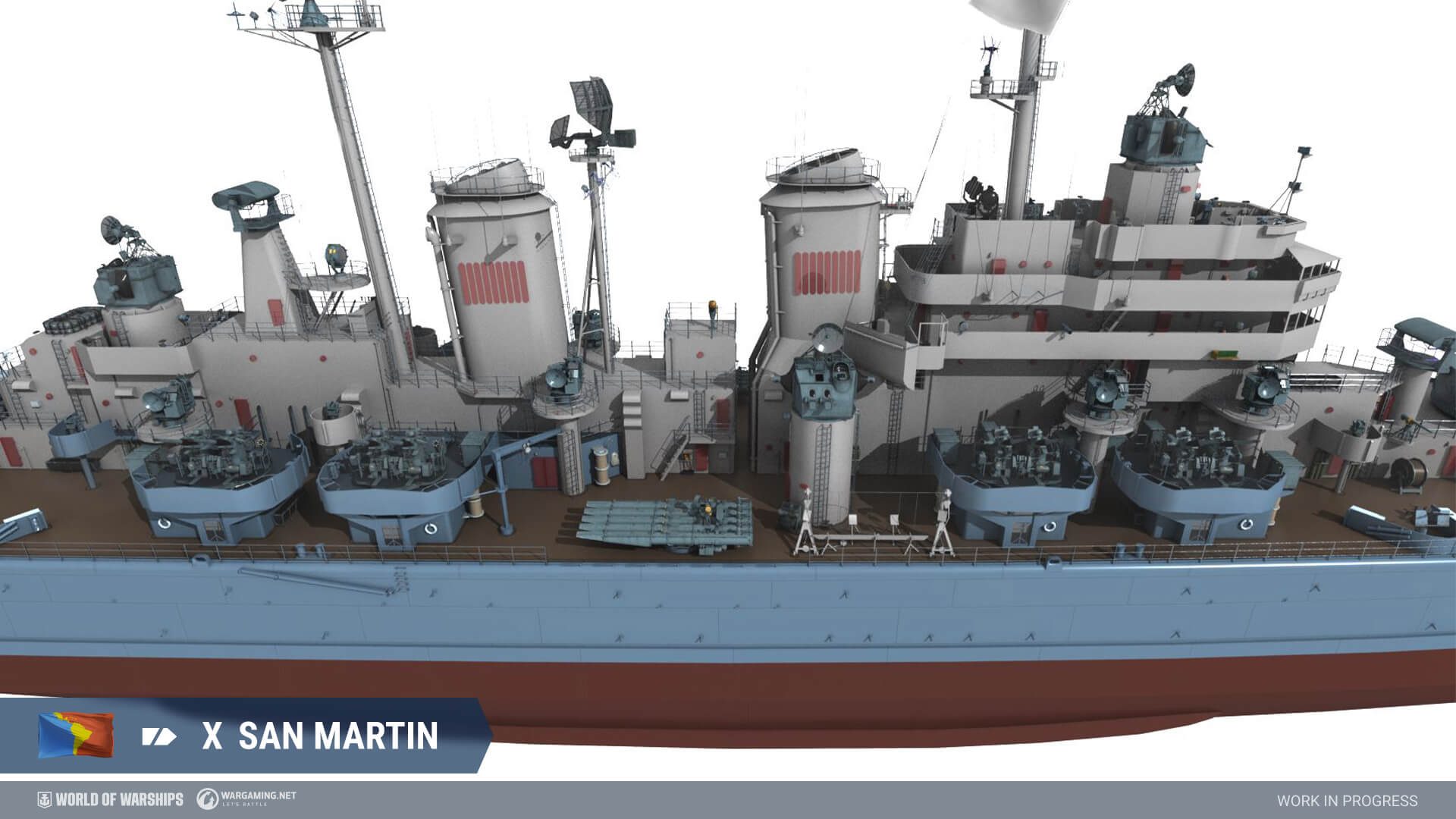 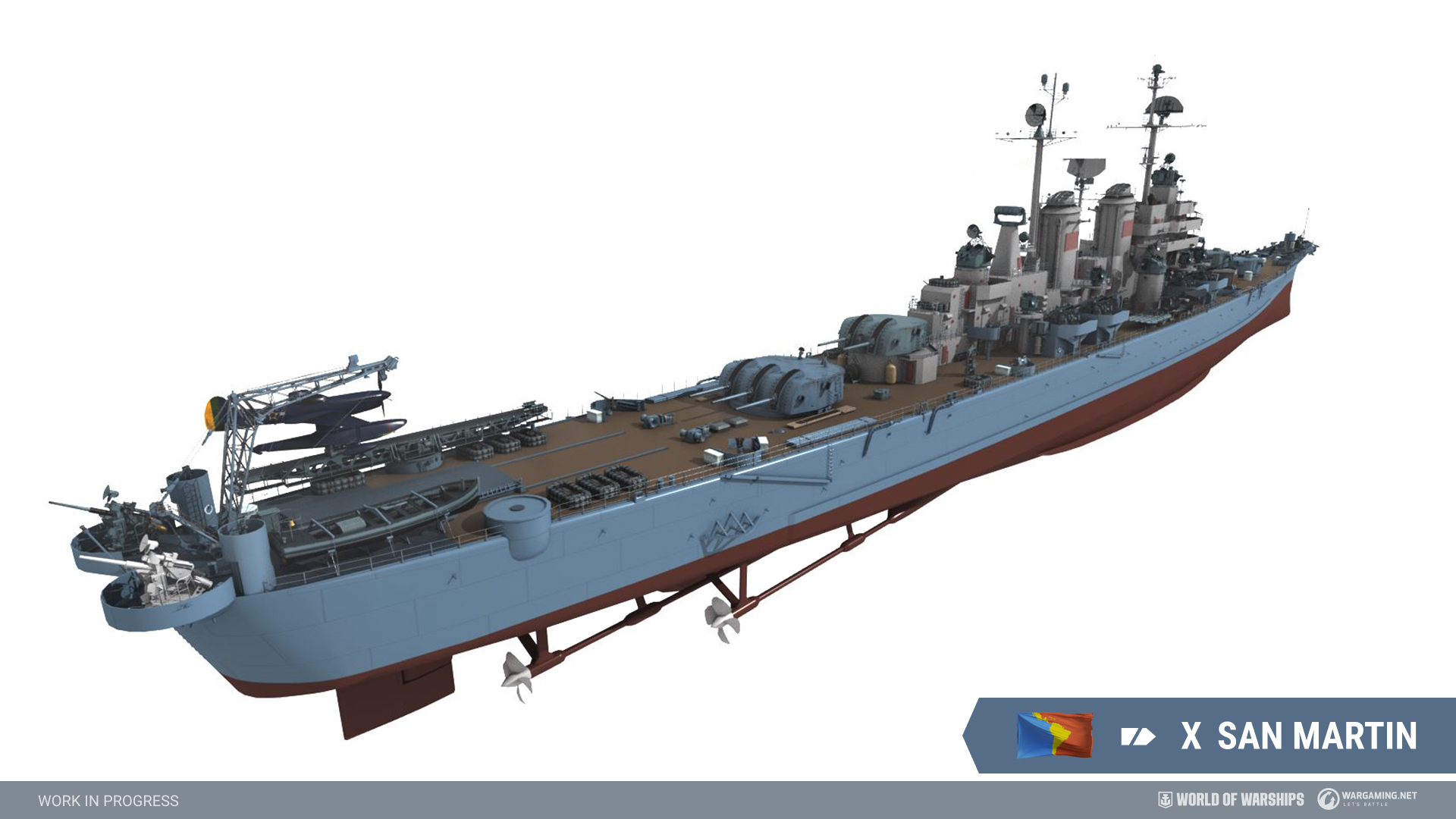 The Argentine Navy could have purchased such a cruiser from the USA after the war, as it happened in reality with two Brooklyn-class light cruisers in 1951. The ship was named after the national hero of Argentina, one of the leaders of the War of Independence of the Spanish colonies in America in 1810-1826: José de San Martín (1778-1850).